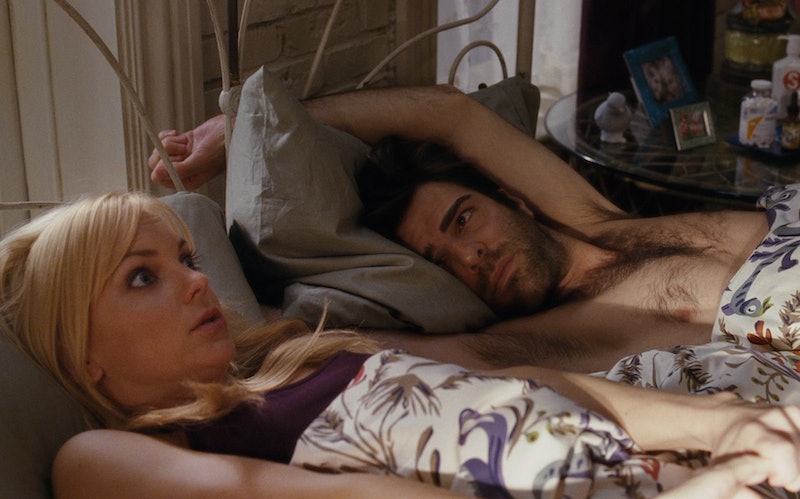 Remember when it was the late-'90s/early-'00s and your "number" was a big deal? Remember on Friends when Monica and Richard talked about how many people they'd both slept with and Richard had only had sex with two women but Monica had slept with marginally less than a football team and it was, like, OMG such a huge deal? Remember that movie where Anna Faris doesn't want to sleep with more than twenty guys because that's the magic slutty number (LOL) but she sleeps with Chris Evans and they fall in love? Remember when measuring how much sex someone has had was a very important thing in determining what sort of person they were? In other words, remember how insanely repressive and slut-shaming and annoying everything we've ever heard about "the right number" of sex partners a person (eh, a woman, let's be honest) "should" have has been?

I haven't been asked how many people I've slept with in about ten years, which is probably for the best, because I'm sure what's worse than answering a very high number is answering with, "Sorry, I lost count around 12th grade." But that's neither here nor there: We've reached a point where needing to know how many people someone has slept with is unnecessary. I don't know what the kids are talking about these days, but as you get older, I guess other learning other things about a human take priority. Like, are you super racist? Or have you killed any kittens? Are you going to try to clip your toenails at the breakfast table,for the love of god?! These seem to be more likely questions up for judgement these days, rather than analyzing the notches on someone's bed post. Here are the reasons why it shouldn't matter to anyone else how many people you've slept with.

What's 1922, you ask? To quote Phoebe on Friends, "Just, you know, long time ago. Well, when men used to tell women what to do... a lot. And then there was suffrage, which is a good thing but is sounds horrible." So to summarize, there was 1922, when having sex with a lot of people mattered, then there was suffrage, and four waves of feminism, and now it doesn't matter who you've slept with because we no longer live in the dark ages. Thanks, Phoebe!

Isn't that boring to people? What a yawn-inducing conversation. If someone really wants to get to know you they should ask about your family, your hopes and dreams, your favorite movie, your traveling experiences, your political opinion on Beyoncé, because anything, ANYTHING is more interesting to know than the number of people (people who, for the record, are people the person you're dating now will probably never even meet or speak to) with whom you've had sex.

It's just so boring to get hung up on the number, as if the figure itself means anything. If you want to judge my sexual history, ask me my stories. Ask to hear about my past relationships. Ask about the people and experiences tied to my Number. I'm no more obligated to actually tell you those things, and you're no more entitled to know, but at least those things might tell you a little bit about who I actually am. There's nothing more boring than someone who judges a person based on a cold, faceless number.

Sure, we live in a confession culture where everyone Instagrams their whole lives, from their first coffee in the morning to their last drink at the bar at night, but it's up to each individual what they share and what they don't. Sex is personal. Do you want to know how many poos someone did in a day? (Actually if you're me you probably do. To compare, make sure I'm healthy, etc. Just regular poo stuff.) It's rude to ask someone how much money they make, or how they voted, and it's the same with sex. Some stuff just isn't anyone else's business.

4. Because it's just a messy can of worms

A good reason the number of people you've slept with shouldn't matter to someone else is because they don't know how they're going to feel about it. It could just be opening a massive, messy can of worms that's just going to make them feel bad. Sometimes it's best just to let sleeping dogs lie.

5. Because it doesn't make you any more or less dateable

Note: If someone is incredibly hung up on how many people you're slept with (assuming you've already given them enough reason to know that you practice safe sex with them and with others, thus ending any legitimate personal interest they might reasonably have in your sexual history), there's a good chance that they are an insecure dud who wants less to focus on who you are as a person, in that relationship, and needs to focus more on how relatively important you and your past make them feel.

6. Because it doesn't define who you are