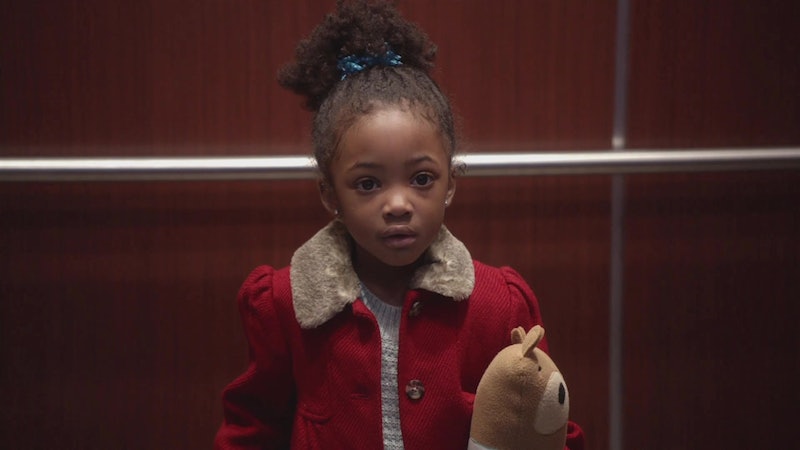 Let's get something straight, Empire fans. I'm not excited about Olivia's introduction and her re-entrance into Jamal's life. But if we're being completely honest, that daughter of hers is totally adorable. During Wednesday night's episode "Our Dancing Days," we got another glimpse at Olivia, her past with Jamal and her daughter when it was revealed that Olivia was actually a backup singer for Empire, and Lucious forced Jamal to marry her, because Lucious was convinced Jamal's sexuality would hinder his career. According to Jamal's confrontation of Lucious, we also found out that Jamal and Olivia did in fact sleep together, but only one time. Lucious is pretty sure that one time is enough times to make a baby, and he's not wrong. But the appearance of Olivia and her daughter at this moment, when Jamal is hitting it big time, is suspect enough to doubt paternity.

In "Our Dancing Days," Olivia's history and purpose for bringing her daughter to the light now are discussed thoroughly by the entire Empire family. But before they can really discuss what to do next, Olivia's daughter randomly showed up in the Empire office elevators saying she lost her mom. Is it possible that Olivia just abandoned her daughter for Jamal to take care of her? Or is she scheming something?

When Vernon tried to investigate Olivia's motives, apparently she just kept telling him that she wanted her daughter to meet her father, that she wanted her daughter to be in her father's life. But I'm still not convinced. The tension from the reveal and Jamal's growing ambition for his music career have already caused Jamal and Michael to break up, what else could all this drama cause?

It's possible that Olivia could just want to jump start her career, and it's also possible that she wants to blackmail the Lyon family with the daughter and Jamal's sexuality to get something more than just money. But I just think there's so much more to her plan. Olivia's only appeared on Empire for a few seconds in one episode, but already she feels nefarious, and definitely memorable.