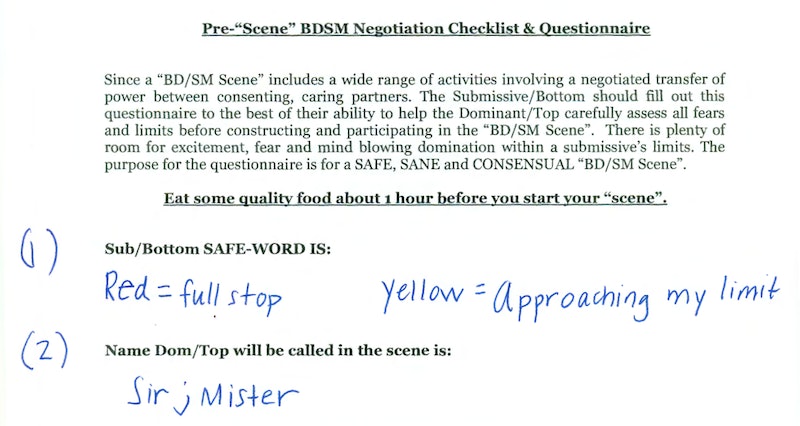 I’ve had fantasies about being dominated for most of my adult life. Even as a young teenager I remember getting excited at the idea of being grabbed and taken by a guy I had a crush on. These fantasies didn’t and still don’t align with my feminist values. Why was I craving something that would be traumatic and terrible if it actually happened in real life? Although I have no interest in letting a man dictate my career or personal life, letting him do it in the bedroom titillates me. And, as Emily McCombs wrote for xojane, “my orgasms are a politics-free zone.

Eventually I’ve learned that the salient term when letting him take charge in the bedrooom is the “letting him.” It’s my choice to submit to a dom in this way or any other way. That’s the key distinction separating dom-sub relationships from slavery, rape, or abuse. There is nothing wrong with craving these experiences, and consent is emphasized again and again in kink communities.

That’s where the contract comes in. As I wrote about earlier, one of the biggest problems in Fifty Shades of Grey is the way Christian manipulates Ana. He doesn’t wait for her to sign the contract before he starts dominating her, and he pressures her with ultimatums. That’s decidedly against kink best practices, and it borders on abusive.

1. I stick with easy safe words that I won’t have trouble recalling if I want to slow down or end a scene. A good dom doesn’t only rely on a safeword for knowing when to stop. They pay close attention to their sub’s physical responses, navigating exactly how far to push them.

2. Names are important because they help you get into your own submissive or dominant head space. Depending on the relationship between the dom and sub names could range from “my little pet” to “king of my world.” "Daddy" or "mommy" is a popular term for doms, although I’ve never been able to get into that.

3. Safety first! Asthma could be fatal if players are using a gag; claustrophobia could be traumatic in a bondage scenario; low blood sugar could cause fainting if you’re upside down too long. The list of potential calamities is endless. One dom taught me that I should never let someone tie me up who doesn’t own a giant pair of safety shears — imagine getting a cramp when you’re all trussed up!

6. In the kink community a “brat” is a submissive who talks back, teases, and treats their dominants cheekily. Not all dominants want a bratty sub, but some people like it.

11. Although someone might identify as a sub with one partner, with other partners they might be dominant. This becomes relevant if a dom and sub play with other people. The sub, for example, might dominate another sub who joins the scene. Likewise, some people identify as “switches” and like being both a dom and a sub depending on the situation.

13. In the Fifty Shades of Grey contract, Christian asks Ana for her hard limits and soft limits, namely the BDSM acts she would never want to do and the ones she could be persuaded into. Since she has never had sex before, she has no idea what to tell him and goes searching on the Internet for the answers. The number of potential kinky acts is so big the two characters barely covered any of them in their discussion. A detailed dom-sub contract would include a list like the following, allowing each partner to disclose their likes and dislikes on a continuum, down to kinks as specific as corset wearing and lectures for misbehaving. As you'll see from my answers, I register on the fairly tame end of kinky predilections.

If you're interested in exploring your kinky side further, check out The Society of Janus, an education organization in San Francisco that offers online resources and in-person events.