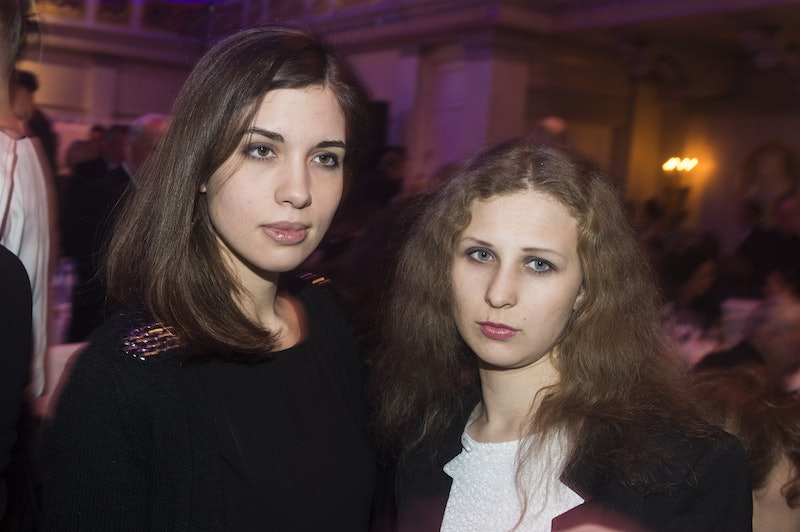 Russian punk band and activist duo Pussy Riot has released their first English language song, and it will likely hit close to home for many Americans. The song is titled "I Can't Breathe." Yes, Pussy Riot's new song is inspired by Eric Garner, an unarmed black man who died after being put in a chokehold by police last year in New York. The words "I can't breathe" were Garner's last and they also became a protest rallying cry following his death.

Never a band to shy away from commenting on political and social issues, members Nadya Tolokonnikova and Masha Alyokhina said in a Q&A with The Guardian that the song was dedicated to all who have suffered at the hands of the state, whether it was through war or police brutality. Of the title of the song, they said,

“I can’t breathe” — these are the last words of Eric Garner. Those words are his, but we hope they can also stand for us and for many around the world, for all who can’t breathe because authorities act with impunity and feel invincible and above the law in using power to humiliate, intimidate, hurt, kill and oppress. We’ve known, on our own skin, what police brutality feels like, and we can’t be silent on this issue.

Pussy Riot has definitely dealt with their share of violence at the hands of the Russian state after their public opposition of President Vladimir Putin, including being whipped in public by police while attempting to perform and being detained while reportedly being roughed up by police during a questioning about a robbery at their hotel. They have even been randomly attacked in public by men with green paint and trash. Keeping their past experiences in mind, their new song is a strong statement on the global nature of protesting parts of the political system or the state that some feel are unfair and unjust.

While the issues that Pussy Riot say they are fighting over in Russia (including systematic suppression of free thought, independent views, and gay rights) are different than the issues focused on in the discrimination protests in the U.S., it's hard to deny that there is some similarity between how Pussy Riot has responded to aspects of Russia's political system and how some Americans have responded to the death of Eric Garner and others like him. It really speaks to how while loud criticisms of the government in regard to social issues may seem local sometimes, it is quite a universal phenomenon. Perhaps that's why Pussy Riot decided to help take part in the Eric Garner protests in New York — and record this entire song over one night.

It'a fitting that their first English song speaks so deeply to an American issue that affected and continues to affect our country. It is worth listening to what Tolokonnikova and Alyokhina have to say about the system and what they think needs to change. After all, they know a thing or two about speaking up and standing up for what they believe in. Check out the video for "I Can't Breathe" below and see what you think.