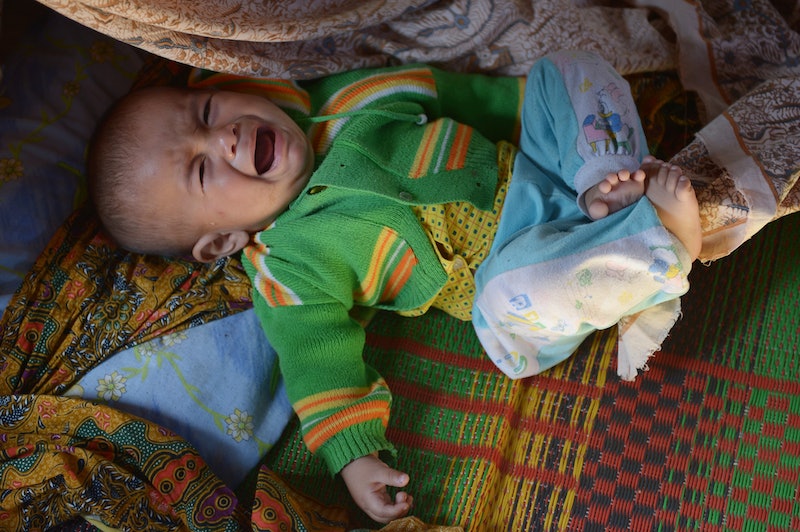 Often, a rapper whose image is built on machismo, street cred, and overall swagger get their tough songs taken and reworked into new, often much softer, less edgy contexts. Like when radio DJs littered DMX's "Party Up" with a bunch of hockey game sounds so it was not only appropriate for airwaves, but also as a backdrop to the countless skating rink birthday parties I attended in late elementary school. There has also been some fairly visionary talk of converting several hip-hop songs into showtunes. I mean, I would definitely listen to all of that, but we're getting off topic. The point is: Hip-hop is a genre that was not only largely built on taking cues from disparate, diverse parts of the audio universe, but it also commonly then picked apart and recontextualized itself. A great example of a rap song that ended up far from where it was likely intended to go: "CoCo" by California rapper O.T. Genasis being used to sooth a crying newborn. Hey, whatever works.

8-week-old Lena, like a lot of tiny babes, experiences bouts of hysterical crying. This is, as I understand it, fairly typical nonsense from brand new humans. After trying some classic, baby-soothing tunes didn't deliver on their promised charm, Lena's parents took another approach: Holding a phone playing music to the sobbing infant, an 808 pounding commenced. It rolled out into O.T. Genasis's true trap insta-classic. Sure, "coco" is widely regarded as slang for cocaine (specifically intended for making crack, if you want to add that to your "fun facts" list), but we can ignore that here! Plus, like, isn't music great all about embracing whatever it needs to mean to each individual listener? Lena's parents seem to be on board with this plan, as all parents are pretty much on board with anything that makes their kids stop crying. "CoCo" knocks her out effectively. See if you don't also feel immediately more calm while listening to these dulcet sounds: