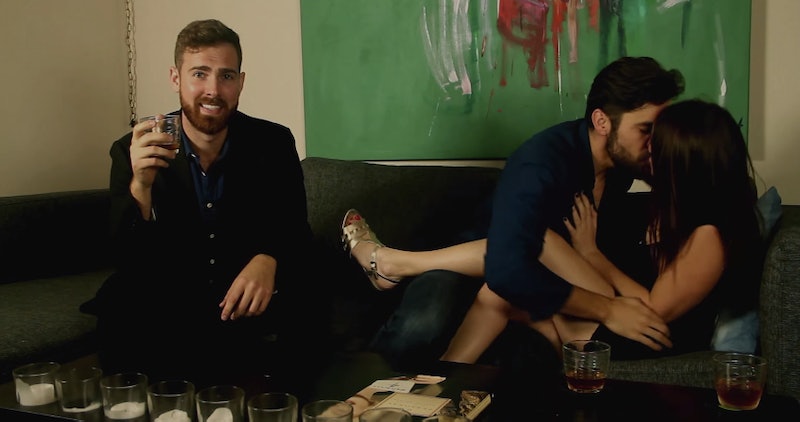 We've all been there right? Either been a drunk guy trying to have sex or been someone trying to have sex with a drunk guy. You know the drill: Things get hot and heavy and yet the booze addled little general just wont stand to attention and do his damn job. This "diary of a drunk boner" hilariously shows exactly what it's like to not be able to get it up when you're drunk in the creepiest way possible: with the flaccid boner personified as a dude sitting next to the horny couple, narrating exactly how flaccid he's going to remain throughout the heated make-out sesh. And speaking of heated make-out sesh, is the couple in this video a real couple? Or did they bone straight after this video was made? Because they appear to be all the way fucking into this. Jamie Dornan, take notes, sir.

The most uncomfortable part is when the dude with the drunk boner is in the bathroom trying to rub it into hardness; He's literally rubbing a shirtless man as though he was a penis, while the shirtless penis man makes a lot of very strange faces. Also, the idea of a talking penis is enough to scare anyone away from penises forever. Anyway, it's stuff like this that makes me happy to be in a relationship, because when we're drunk, we can just pass out together and drunk penis can rest without the pressure of having to perform. Literally no one in a relationship cares about drunk boners. This is the bane of one night stands and first dates. Drunk penis is definitely #singlepeopleproblems. Watch and commiserate below:

1. Losing one shoe (HOW IS IT ALWAYS JUST ONE?)

2. Trying to buy beers to get more drunk

3. Not realizing that it's both raining and you're missing your mouth

5. Just generally being too drunk for life