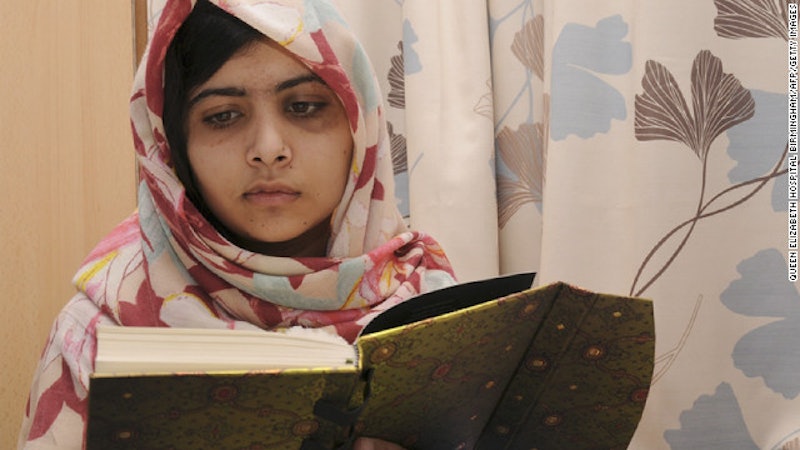 Wednesday marks the one-year anniversary of the day when then-15-year-old Malala Yousafzai was shot by a Taliban gunman in Pakistan. After being sent to recuperate in a Birmingham hospital, Yousafzai's used the attention her injury received and the safety of her new home in England to become an activist for the equal right to education around the world. After speaking at the UN on her 16th birthday as part of her campaign, she's now the youngest nominee for a Nobel Peace Prize.

Her new book, I Am Malala , was released yesterday. The book doesn't speak so much about her life after the injury as it does about her life in Pakistan (a country she misses dearly) under the Taliban rule. In simple, clear writing, I Am Malala gives a rare and moving first-person glance into what it's like to be a teenager in a country seized by extremists who stand against the basic freedoms you believe in.

I read all of I Am Malala in one day. While I've been pretty busy casually bawling my eyes out as a result, I did manage to write up some major takeaways from her new book:

1. In some ways, Yousafzai was a normal teenager:

I told my best friend Moniba everything. We'd lived on the same street when we were little and had been friends since primary school and we shared everything, Justin Bieber songs and Twilight movies, the best face-lightening creams...

I had become interested in journalism after seeing how my own words could make a difference and also from watching the Ugly Betty DVDs about life at an American magazine. This was a bit different — when we wrote about subjects close to our hearts these were topics like extremism and the Taliban rather than clothes and hairstyles.

2. But at the same time, the Taliban was attempting to make women invisible.

The [Muttahida Majlis e-Amal] MMA government ... wanted to create a morality police like the Afghan Taliban had set up. The idea was they would be able to stop a woman accompanied by a man and require her to prove that the man was her relative. Thankfully, our supreme court stopped this. Then MMA activists ... tore down billboards with pictures of women or blacked them out with paint. They even snatched female mannequins from clothing shops ... [and] insisted women cover their heads. It was as though they wanted to remove all trace of womankind from public life.

3. The differences in Pakistani and American cultures are vast, but we can't fall into the trap of judging them against each other.

Any successful attempt to mediate in Pakistan or the Middle East needs to be done from a perspective that recognizes the traditions of a society and accepts them as a legitimate part of their history. Instead, we in the West tend to interpret other region's problems and suggest solutions based on our society's norms. Yousafzai illustrates the system in place in her hometown:

As a respected man in the community, my father was often called in to mediate feuds. He did not believe in badal — revenge — and would try to make people see that neither side had anything to gain from continuing the violence, and it would be better for them to get on with their lives. There were two families in our village he could not convince. They had been locked in a feud for so long no one even seemed to remember how it had started - probably some small slight as we are a hot-headed people. First a brother on one side would attack an uncle on the other. Then vice versa. It consumed their lives. Our people say it is a good system, and our crime rate is much lower than in non-Pashtun areas. But I think that if someone kills your brother, you shouldn't kill them or their brother, you should teach them instead.

4. After her injury, Malala realized the power of her position right away.

Rehanna told me that thousands and millions of people and children around the world had supported me and prayed for me...I realized what the Taliban had done was make my campaign global...

I've even been nominated for the Nobel Peace Prize, the youngest person ever. When I received prizes for my work at school I was happy as I had worked hard for them, but they only remind me how much work still needs to be done to achieve the goal of education for every boy and girl. I don't want to be thought of as 'the girl who was shot by the Taliban' but 'the girl who fought for education.

5. Stick to what you say, and never back down from your message.

[The Taliban commander] said the Taliban had attacked me not for my campaign for education but because I tried to 'malighn [their] efforts to establish the Islamic system.' .... He wrote that they would forgive me if I came back to Pakistan, wore a burqa and went to a madrasa [school for Islamic education]... I thought, Who is this man to say that? The Taliban are not our rulers. It's my life, how I live it is my choice ... I want to learn and be trained well with the weapon of knowledge. Then I will be able to fight more effectively for my cause.

Or, as Yousfzai puts it later in the book:

I am Malala. My world has changed but I have not.

More like this
We’ve All Had Bad Sex. Nona Willis Aronowitz Is Talking About It.
By Sophia Benoit
Demi Lovato Explains Why She's Now Using She/Her Pronouns Again
By Alice Broster and Radhika Menon
How Do I Deal With Both ED & Premature Ejaculation?
By Sophia Benoit
The 5 Best Hair Ties For Thick Hair, According To Reviewers
By Jenny White
Get Even More From Bustle — Sign Up For The Newsletter