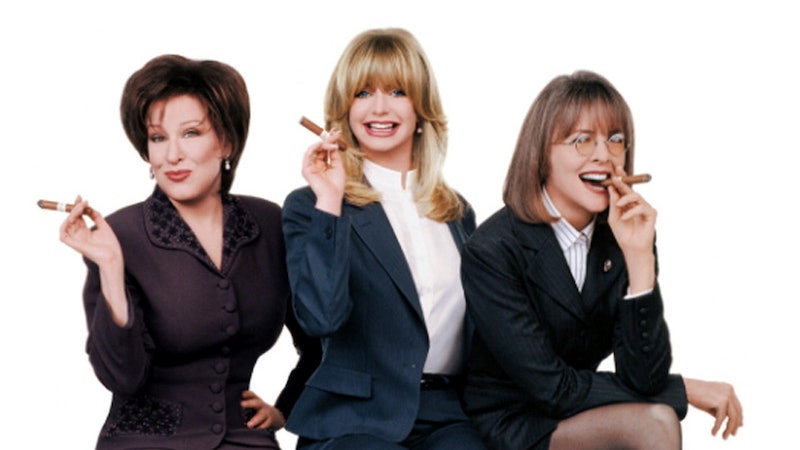 One of the best pro-women movies of the 20th century was The First Wives Club. Starring Bette Midler, Goldie Hawn, and Diane Keaton, the 1996 film went on to earn over $181 million worldwide. So why didn't the studio capitalize on the success and release a follow-up film? Well they tried to — but Goldie Hawn says a First Wives Club sequel was never made because of anti-feminist reasons. In short, the studio was sexist and didn't want to pay the actresses what they deserved. "The big money goes to kids and young men," Hawn recently told the Harvard Business Review. And the studio didn't want to give the big bucks to three leading ladies.

Hawn revealed that because the actresses "were all women of a certain age" they took a pay cut to get the film made. But the movie ended up being incredibly successful. It was made for a reported $30 million and went on to earn $181 million. Hawn figured if they wanted to make a sequel, the studio would take that success into consideration when working out the salaries — especially since Hawn, Keaton, and Midler were so kind as to take a pay cut in order to get the first movie made.

The movie was hugely successful. It made a lot of money. We were on the cover of Time magazine. But two years later, when the studio came back with a sequel, they wanted to offer us exactly the same deal. We went back to ground zero. Had three men come in there, they would have upped their salaries without even thinking about it. But the fear of women's movies is embedded in the culture.

Even in the 19 years since The First Wives Club came out, things haven't improved much. Although we do have more female-lead movies (Bridesmaids, Pitch Perfect, etc.) actresses still have to convince studios that yes, people do want to see movies about women. Last year at the Oscars, Cate Blanchett called out the industry for this behavior, reminding us that it was still a prevailing thought, even all these years later.

Those of us in the industry who are perhaps still foolishly clinging to the idea that female films, with women at the center, are niche experiences. They are not. Audiences want to see them, and in fact, they earn money.

But Hawn's story is even more depressing when you consider what a feminist movie The First Wives Club is. For the studio to make that movie, but then to treat its own stars unfairly is pretty awful. The premise of the movie is women getting back at their husbands for leaving them for younger women. It's been called a "quintessentially 90s nugget of female empowerment" by the blog Bitch Flicks because it doesn't feature the wives getting into cat fights with their husbands' new girls. Instead the women use their intelligence and mental prowess to exact revenge.

Bitch Flicks reviewed the movie saying, "The First Wives Club isn’t a story about romance or marriage. It’s a story about finding the bravery to stand up for yourself—especially when 'yourself' is a woman, and not the young, pretty kind either."

So for the studio to create this feminist storyline, and then be completely sexist in their lack of a salary increase is totally unacceptable. As much as I would have loved to see a sequel to this flawless film, I'm glad the actresses stood up for themselves and refused to do it—and I know their characters would have been proud.