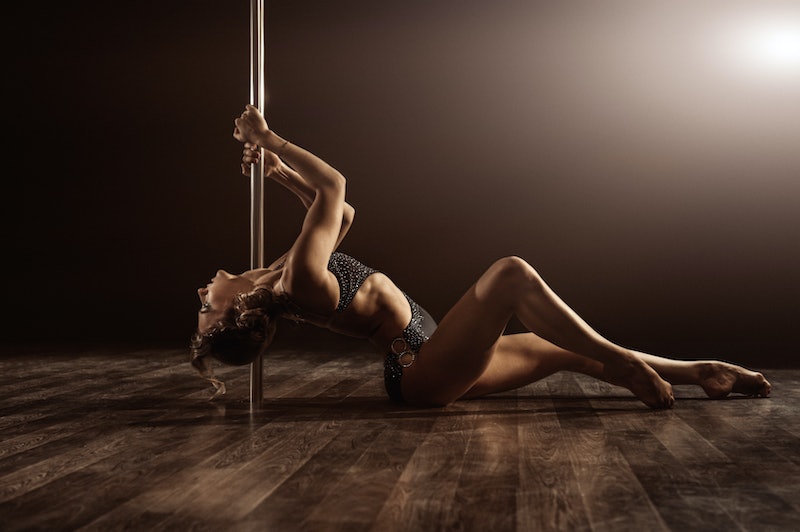 There are all sorts of negative perceptions of pole dancing, especially of women who do it professionally — perceptions ranging from the slut-shaming variety to the we-must-save-the-poor-voiceless-sex-workers variety, none of which are very productive. Which is why we all could learn a few things from "Why I Dance," a video in which pole dancers share their reasons for participating in the sport. And shockingly, none of those reasons lines up with the stereotypes. Go figure.

The video features 16 amateur pole dancers of varying age, race, and body type as they share who they are, why they dance, and just what they can do on a pole. It began as a Kickstarter campaign launched in 2014 by three pole dancing feminist producers in Los Angeles, Amy Main, Sascha Alexander, and Melanie Zoey Weinstein — and I'm happy to say that the final product they've created is absolutely gorgeous.

There are a lot of misconceptions about pole dancing, but in reality, it can be incredibly empowering and awesome. "Pole dancing has changed my life," said Amy Main, one of the video's producers in a blog post. "[My] initial encounter with pole allowed me to explore and appreciate my sexuality and sensuality as a woman in a way I never had before. It felt like I was shedding my dry, scaly, battered skin, and emerging as a soft, strong, beautiful, feminine creature." The video she and her fellow producers have created is definitely a tribute to that sentiment, right down to its soulful original rendition of the song "Down in the River to Pray." The video is eye-opening, and here are just a few of the things to take away from it.

How do they not fall down? I don't know. Possibly some magical anti-gravity properties of the pole? It's wild. And these aren't even the most impressive examples.

2. Forget Your Stereotypes of Pole Dancers

When asked to describe themselves, the women in the video gave all kinds of answers, from jobs to personality traits to how they are related to other people. The message is that these women are not just anything, let alone defined by what they do on a pole.

For some this might seem like an obvious point, but plenty of people are turned off by the male-gaze-centric depictions of pole dancing that you tend to get in mainstream media. But it's clear that for the women in the video, the sexiness is not for the benefit of other people, but something they do for themselves. And that is super sexy.

The women in this video aren't anyone's victims or anyone's sex objects. Hell, they're not even held down by gravity! They're awesome and they know it.

5. People Have All Different Reasons for Pole Dancing

They all have different reasons, but all of their reasons are their own. And if there's one thing we should all be for, it's women doing things for themselves.

Seriously, these women seem to be having a ton of fun making this. It's awesome. So check out the full video here:

Images: Fotolia; Why I Dance Film/Vimeo (12)