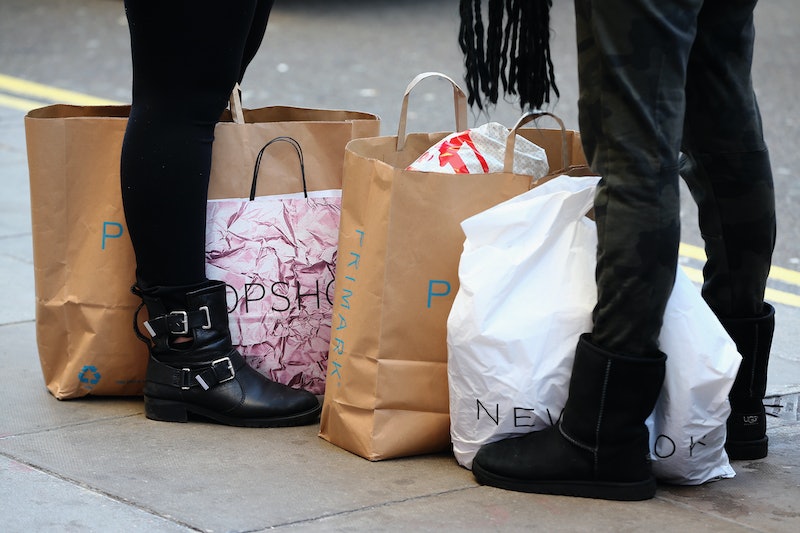 If you find yourself coming home from the mall with at least three more bags of clothes than you were planning on buying, it might not actually be because you have the self-restraint of a six-year-old on Christmas morning. According to a recent study, hunger makes us buy more stuff, even when there's no food available for purchase. Now, I'm not saying it's a great excuse to buy yourself Cinnabon next time you're out shopping. What I am saying is you'll definitely find me in line for some cinnamon-y goodness when I take my little brother to the mall this weekend.Researchers at the U

niversity of Minnesota's Carlson School of Management conducted several studies on the subject, Science Daily reports. In the first, participants were asked to fast for at least four hours before the experiment. They were then split into two groups; the lucky ones got to eat cake to satiate their hunger, while the others didn't eat anything. Both groups were then given a survey on binder clips and the opportunity to request as many samples of the items as they wanted. The verdict? Participants who didn't get to eat before the survey ended up requesting a whopping 70 percent more than the ones who got cake. Nobody said anything about whether they were really just suffering from delusions brought on by hunger that made them think binder clips were interesting, but I have my suspicions.

<img alt="" src="http://media.tumblr.com/b58aa35476f443c7908d4ff5bf876114/tumblr_inline_mi74f7uyjh1qz4rgp.gif" class="article-body-image" title="Image: http://media.tumblr.com/b58aa35476f443c7908d4ff5bf876114/tumblr_inline_mi74f7uyjh1qz4rgp.gif"/>Another study surveyed shoppers at a department store, analyzing how hungry they reported feeling and how much they bought. Sure enough, the results showed that after controlling for how long they'd been shopping, the hungry participants spent 64 percent more money. This explains a lot about my Black Friday shopping habits, but what's going on in our heads to make this happen?According to Alison Jing Xu, an assistant professor at the Carlson School, it has to do with the mindset hunger puts us in. When you haven't eaten in a while, you start thinking about "seeking, acquiring, and consuming food," she told Science Daily, and even though that sweater from Forever 21 isn't going to have any effect on your chocolate craving, your brain is stuck in "buy stuff" mode. As you probably know from personal experience, spending a little too much money isn't the only effect hunger can have on our minds. A landmark 1944 study, known as the Minnesota Starvation Experiment, restricted the diets of 36 volunteers for almost a year, and they found that in addition to "fatigue, irritability, depression, and apathy," the men reported a curious obsession with food. Much like how you find yourself fantasizing about pizza when you're too busy to eat lunch, food was pretty much all the men could talk, think, or even dream about. A study discussed in Psychology Today found that gaining weight is a prerequisite for recovery from anorexia — as the author of the article put it, "

you can’t make an anorexic want to put on weight until he or she has begun to do so." Another study found that being hungry is even linked to more aggression between spouses. I guess the couple who eats together stays together?

<img alt="" src="http://38.media.tumblr.com/tumblr_lqywgqvTol1qjgyuwo1_500.gif" class="article-body-image" title="Image: http://38.media.tumblr.com/tumblr_lqywgqvTol1qjgyuwo1_500.gif"/>Nobody really likes being hungry, but holy moly it's worse for your mental state than I thought. Next time your family yells at you for wanting to stop for lunch on a road trip, direct them to this article. Would they rather swing by Taco Bell before your blood sugar drops any further, or deal with Hangry You, who's probably just going to talk about food the whole way anyway? I rest my case.