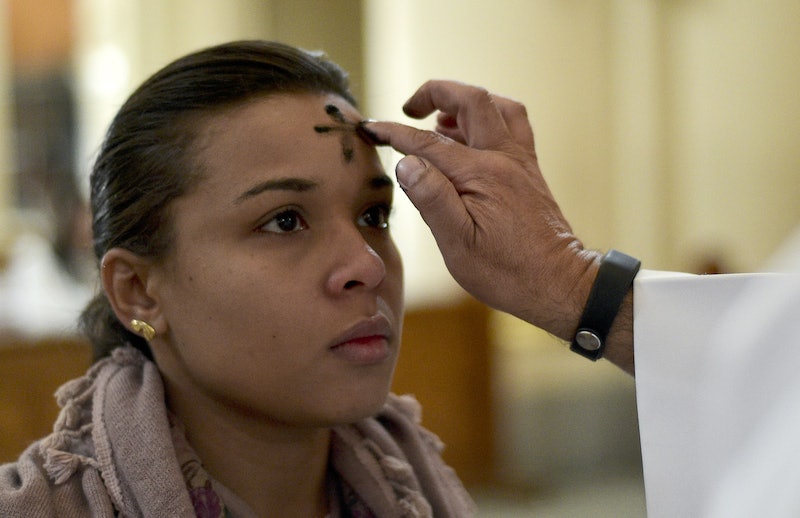 For those of you who don't celebrate Lent, this past Wednesday was Ash Wednesday, the first day of the 40-day period leading up to Easter. It involves people who celebrate it getting marked with crosses drawn in ashes on their foreheads — and this year, lots of Catholics also decided to mark the occasion by sharing selfies of their ash-adorned forehead with the hashtag #AshTag. Lots of these #AshTag-ers were priests; but even so, not everyone is on board with the trend.

Ash Wednesday is the start of the most important part of the liturgical year, Lent and the Easter season. On this day, the palms from the previous year's Palm Sunday are burned and the ashes are used to mark parishioners with crosses. It's meant to remind people of their own mortality, and encourage people to start off Lent's 40 days of fasting and prayer with personal reflection.

It's long been frowned upon to treat your ashes like some sort of mark of being a good little Catholic, or to be boastful or prideful about being marked at all. The ashes are reminders for the community, not badges of individual achievement. And as such, it's understandable that for lots of people, taking a selfie and posting pictures of yourself online doesn't seem very in keeping with the idea. As Peter W. Chin points out at Christianity Today, "A selfie hardly seems like the appropriate way to mark a season of self-denial and humility where we remember that Jesus’ own motivation was anything but selfish."

Still, plenty of others feel that #AshTag isn't about boasting or being self-centered, but a way of sharing their experience online. As Jonathan Teixeira wrote for Focus, "#Ashtag doesn't say, 'Look at ME! See how holy I AM?! Don't you love ME?' It says, 'I'm Catholic. I'm a sinner. None of us can do this alone. We need Jesus and each other.'"

Theologically, #AshTag is complicated, but as a lapsed Catholic myself, I don't see it as a sign that people are violating the spirit of Ash Wednesday; rather, I think they're embracing it. After all, Ash Wednesday, like pretty much any holy day on any religion's calendar, is partly about community. In this case, there's actually an even greater emphasis on the community, since people are given visible marks of their belonging. But being Catholic means not just being part of a local community, but a global one, made up of over 1 billion people all around the world. And thanks to the Internet, those people aren't as far away as they used to be.

So sharing an #AshTag can be a really cool way to participate in a global community through the power of modern technology. It can also, as Teixeira suggests, be a way of keeping your online life reflective of your offline life. It can probably be a shallow way of humble bragging about what a good Catholic you are, too. How you take it all depends on a person's motivation, which isn't really something you can judge from afar, anyway.

Either way, with both clergy and lay people participating, I have a feeling #AshTag is not going to go away in future years. Check it out: