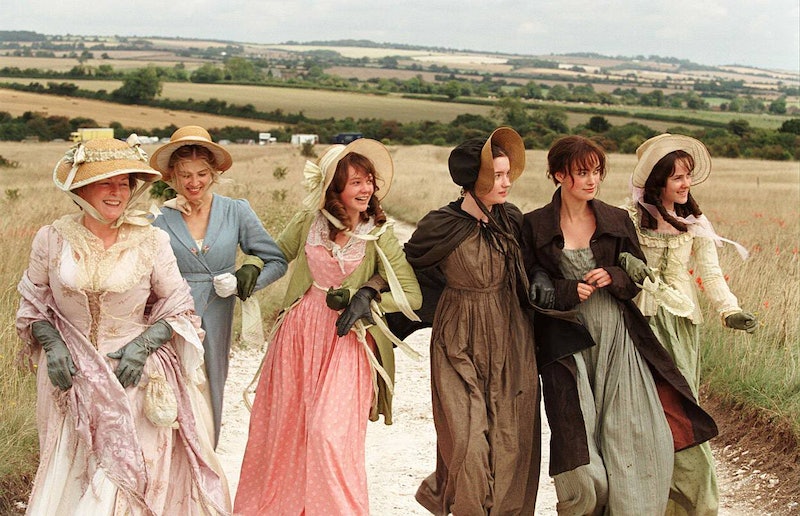 It is a truth universally acknowledged that there have always been mean girls. In fact, for as long as there have been manners and rules of etiquette, there have been sharp tongues (and strong-willed elbows) to defy them. Just ask Jane Austen, who began her first draft of Pride and Prejudice in 1796.

A true mastermind of the social commentary novel, many of Austen’s stories are a mere burn book away from North Shore High and its sexually active band geeks, cool Asians, desperate wannabes, and the worst people you will ever meet: The Plastics. That two centuries come between The Plastics and the Bennets, the Dashwoods, the Woodhouses, and the Bertrams is but a small matter. And so here’s a look at how Jane Austen herself might recast The Plastics (and their frenemies) with some of her own favorite maneaters, Lotharios, and overbearing, embarrassing mother figures.

Self-centered, superficial, and uppity, Regina George is the Caroline Bingley of our generation. Valuing power over affection in all of their female relationships, both women are crookedly underhanded and classic frenemisers, and each find themselves in a precarious love triangle that they attempt to outwit by socially disenfranchising their rival. Spoiler alert: Neither of these girls get the guy. Instead, Caroline gets an invite to Darcy and Elizabeth’s wedding. Regina gets hit by a bus.

Like Emma Woodhouse, Gretchen is a powerhouse of social knowledge. It’s like Damian says: “That’s why her hair is so big. It’s full of secrets.” Both of these girls want desperately to be liked by their peers, and they achieve and maintain their popularity in similar ways. When Gretchen lets slip to Cady that she’s known about Regina hooking up with Shane in the projection room (but hasn’t told anybody about it because she’s such a good friend), we are reminded of Emma’s equally artful rumor-spreading. Luckily for Emma, Austen writes her a very happy ending with some excellent prospects. Is Tina Fey as generous with Gretchen? Nope. Still none for Gretchen Weiners.

These girls are gossippy, immature, and fairly featherbrained, but they lack the nefarious intentions of true mean girl masterminds. They also lack an understanding of the ways of the world, and that naïveté strips them of their agency, sending them down the occasional slippery slope. This, of course, plays out most emphatically in their love lives. It’s like Karen says when justifying her crush on Seth Mosakowski, “You have your cousins, and then you have your first cousins, and then you have your second cousins…” Meanwhile, Lydia characterizes “Hot Mess” in her own very special ways.

Cady and Marianne are both characters that change considerably over the course of their narratives. Their shortcomings are fueled not by malice or by lack of intelligence, but instead by their emotions — principally their jealousy. Cady’s agreement to help take down The Plastics is propelled by her desire to seek revenge on Regina, who has just impishly snatched away her dream guy, Aaron Samuels. Similarly, Marianne nearly dies as a result of refusing to attend to her health, which she stops caring much about after hearing of her beloved Mr. Willoughby’s marriage to another. Marianne, of course, does not push the new Mrs. Willoughby in front of a bus, as Cady does Regina. You know, allegedly.

Like Mrs. Bennet, Janis exhibits a keen understanding of social politics and commerce. And while Mrs. Bennet, is primarily characterized by her frivolity and her sometimes short-sighted interests, she is also a master super-schemer, just like Janis. If the Kalteen bars that Janis pedals to Regina via Cady were around in Austen’s time, Mrs. Bennet would certainly have her hot little hands all over a big bulk order, ready to pass them out to all the eligible young ladies within a carriage ride’s distance of Pemberley. Anything to give her five young daughters an edge in the local courtship scene, right?

Like Edmund, Damian is a good guy who values and honors his friendships. And also like Damian, he is the guy we want to hang out with the most. When it comes to spotting duplicitous, slippery eels, though, Edmund could take a tip or two from Damian. Damian is able to identify Regina as fabulous but evil, something Edmund does not discover about Miss Mary Crawford until nearly too late in the game. Meanwhile, Edmund could also learn something from Damian — something about, umm, how to not marry his first cousin. I'm just saying.

Both guys are easily manipulated — Aaron by the siren song of Regina George and Mr. Bingley by the rumormongers of Netherfield Park. But even though, at times, we are forced to question their taste in women, they both pull through as “good guys.” Plus, I’m betting that, like Aaron, the dashing Mr. Bingley also looks sexy with his hair pushed back.

Both Ms. Norbury and Elinor are strong-minded, sensible, and mature, and each provide a counterbalance for the more reactive characters that they accompany: Cady and Marianne. Even though Ms. Norbury is Cady’s teacher, she preaches girl power to Cady like any good big sister would, Elinor included. Perhaps, like Ms. Norbury (and like Damian’s grandmother), Elinor also takes her wig off when she is drunk. After all, those Regency-era balls could get pretty rowdy.

With a quick costume change, Mrs. Bennet could easily play a second role as Mrs. George. Like Mrs. Bennet, Mrs. George is all-too-consumed with being the “cool mom” — so much so that her antics have quite the opposite effect. Is there anything more embarrassing than your mom blabbering nonsense in front of that guy that you like? Try Amy Poehler hocking mocktails in a pink velour track suit.

More like this
What Is Barack Obama’s Net Worth? He Makes *Way* More Now As An Ex-President
By Hugh McIntyre
Watch The Emotional Trailer For Dolly Alderton’s 'Everything I Know About Love'
By Bustle UK
Conversations With Friends' Endometriosis Scenes Are As Brutal As It Gets
By Ivana Rihter
'Bridgerton' Season 4 Will Likely Focus On This Brother's Divided Heart
By Grace Wehniainen and Alyssa Lapid
Get Even More From Bustle — Sign Up For The Newsletter