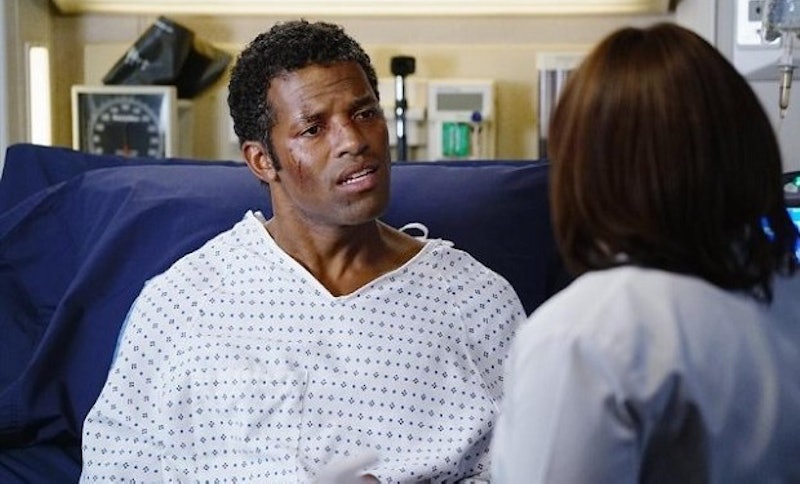 Shonda Rhimes is, once again, increasing LGBT representation on TV by adding a transgender storyline to one of her shows. On Thursday's Grey's Anatomy, Ben Warren's brother came out as transgender, and the show handled the story beautifully. Queen of the night was definitely Miranda Bailey, whose patience for her husband's intolerance evaporated as quickly as her use of the "he" pronoun once Curtis came out as a woman named Rosalyn.

I was really pleased with Bailey, and the show in general, as it both explained Curtis' transition to the audience, and treated it with all the compassion and respect such an important storyline deserved. I did have one problem, though, with the way things were handled: Bailey should have let Rosalyn tell her own story. Bailey's husband Ben knew something was up, and feared it was drugs when Rosalyn's liver levels were off the charts. "You're lying to me," he accused his wife, who eventually caved and gave up Rosalyn's secret. "Your brother is becoming your sister," she tried to explain.

I get that Bailey felt trapped because she didn't want to lie to her husband, but it was not her story to tell. As a doctor, she wouldn't have been legally allowed to divulge Rosalyn's medical history anyway. But more than that, coming out is such a special and scary thing. Bailey should have insisted that Ben talk to Rosalyn, rather than out her that way.

Aside from that misstep, Grey's Anatomy treated the storyline with the utmost respect, and taught their viewers a few things too. Here are five ways the show knocked things out of the park, and I hope the rest of network television is paying attention, because this is how you respectfully portray a transition on TV.

The Immediate Switch Of Pronouns

Bailey was insistent upon switching to female pronouns (though some transgender people prefer to go by pronouns other than he or she) as soon as she found out about the transition. "Curt is transitioning. He...She is transgender," Baily told Ben. And for the rest of the episode she referred to the character with feminine pronouns. (The character didn't reveal her chosen name until the end of the episode, but after coming out as Rosalyn, Bailey immediately used that name, too.)

Bailey was very sensitive to pronoun use, so when Ben kept insisting on using "his," Bailey very forcefully reminded him "HER" and left the room. So much was conveyed in that single word, and I'm glad Bailey let her husband know she would not be on his side if he was going to be intolerant.

In a simple sentence Bailey described being transgender not only to Ben, but to the audience as well. Unfortunately, many people still aren't clear on what exactly it means, so it was helpful to have a simple description at the start of the plot point. "She is transgender and she identifies as female and wants to live life as a woman," Bailey patiently explained.

Even better was the way she emphasized that this wasn't a burden for Ben to bear, but a good thing, because Rosalyn was coming out as who she always was. "You will listen to Curt tell you her good news — and it is good news — and you will tell her you love her and will always be here for her," Bailey told Ben firmly.

The Choice Of Character

Transgender characters are woefully underrepresented on television, and trans people of color even more so. I was thrilled that Rhimes chose to highlight the story of a black transgender character. After all, trans women of color are the most frequent victims of violence, and their narrative needs to be included in the LGBT conversation.

Ben was not happy that his "brother" kept such a big secret from him all these years. But for every critical or ill-informed remark he had, Bailey had an intelligent response. I think all families of transgender people could benefit from watching this episode of Grey's Anatomy, because it makes it very clear that while transitioning is an adjustment for the family, of course, ultimately it has nothing to do with them.

Ben worked himself into a total rage that Rosalyn had "lied" to him for 25 years. Ben felt betrayed, but Bailey nipped that thinking in the bud. "I told him everything and he waited 25 years to tell me. How's this supposed to make me feel?" Ben whined, to which Bailey responded, "This isn't about you. It's her song so get off the stage and let her sing." Bless.

At the very end of the episode, Bailey brings Jackson in to talk to Rosalyn. Jackson doesn't patronize her or treat her any differently. He simply asks if she's decided on a name and then starts calling her that immediately. His response was everything Ben Warren's wasn't, and it was beautiful. But beyond that, Jackson's involvement gave viewers a glimpse at the real medical help available for transgender people. Jackson asked Rosalyn if she'd been to a therapist lately, and arranged for that to start up again. Then he talked about the hospital-approved drug treatment plans that Rosalyn could begin, which were safer than the off-brand estrogen she'd been taking.

The show handled Rosalyn's story with compassion, but most importantly, seriousness. There was a tone of: "This is who you are, and we're going to help you get there in the safest way possible." It was very encouraging to see the subject tackled with so few mistakes, and with such an emphasis on education for those watching.

This kind of stuff matters because it can show that real-life brother of a transgender person watching at home how not to respond. Or it can show that young transgender viewer that there are safe ways to transition, and doctors who can help you do that. Ultimately, Grey's Anatomy showed that there is hope for those who feel trapped in their bodies, and that there are people who love them, understand, and will do everything they can to be there for them. I can't wait to see how this meaningful storyline progresses throughout the rest of the season.