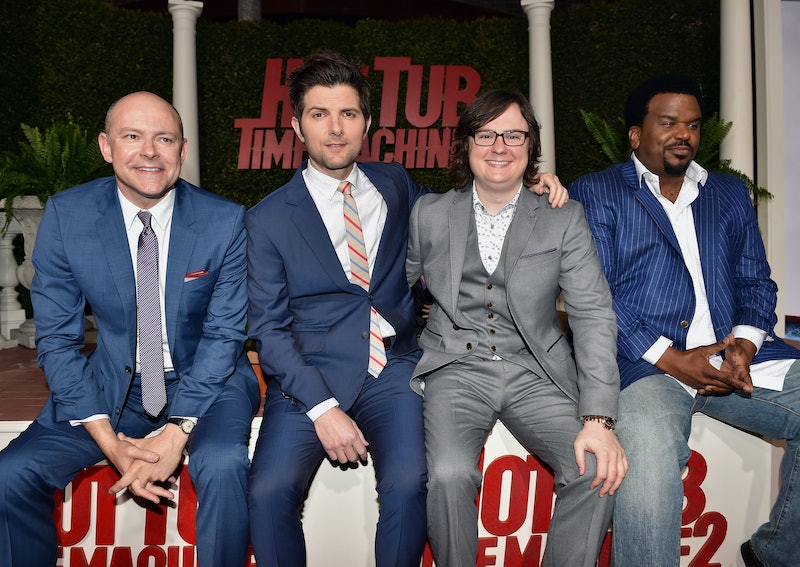 I was flat-out obsessed with the first Hot Tub Time Machine flick. As a big Back to the Future fan, I loved the nod to the classic time travel flicks of the '80s, made all the more authentic by actual '80s star John Cusack. Cusack wasn't holding boom boxes under anyone's window in the first Hot Tub Time Machine(I'll never be able to listen to "In Your Eyes" by Peter Gabriel without thinking of him) but he did take on Marty McFly-esque role as arguably the lead character of the picture. This led many fans to question how the movie was going to function without him when Cusack decided not to sign on for Hot Tub Time Machine 2 . I recently had a chance to see the sequel, and you can put your worries to rest — Cusack's character may be offscreen, but he's quite a big part of the sequel. (Warning: mild spoilers for Hot Tub Time Machine 2 ahead.)

Adam Scott took Cusack's place as the fourth member of the time-traveling team, playing Cusack's character's son Adam Jr. in the film. "I actually had a conversation with Steve [Pink, the film's director] before Josh [Heald] had even written the script and agreed to do it then, which was a stupid, stupid thing to do," Scott jokes."But then it was a no-brainer. It just sounded like going to summer camp in New Orleans with some friends, and I'm really glad I did. It was really, really fun."

Scott's character's presence in the film actually enhanced the film as a whole — seeing Cusack's character's son was just a fun reference to the fact that these people can move through time and space. But what of original Adam, whom we're told is off "finding himself" in the film? We do get a hint at where he may have been — and that's in the hot tub. The guys find his trench coat sitting on the side of the tub, hinting that maybe the original character has taken a dip or two without the other three.

"I think Hot Tub kind of exists like the Avengers, in terms of the universe. I'd say [John Cusack's character Adam] is kind of like Thor, or Batman," says Pink. "One of the cosmic characters," chimes in Heald. "We put that in there to basically show that he didn't just go poof and disappear from this universe."According to Heald, it also makes original Adam a "suspect" for a crime that happens at some point in the film. "We don't know where he's been across space and time."

Hot Tub Time Machine 2 hits theaters Feb. 20. Check out my interview with the cast below.