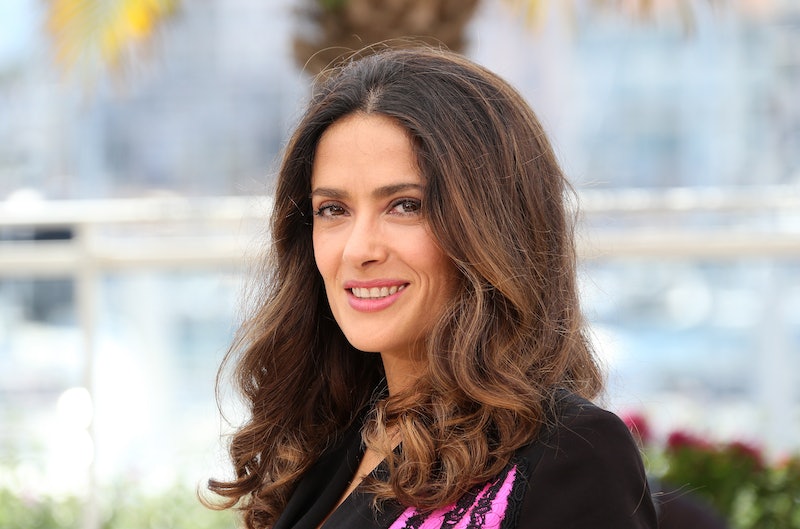 In a recent interview with Net-A-Porter's magazine The Edit, Salma Hayek said that she used to be chubby because of her love for food and wine. And I think we can all collectively say, "Uh, so what?" Food is delicious. Wine is amazing. Why did Hayek feel the need to basically apologize for her weight, instead of just raving about her top five favorite pizza places?

As The Edit's cover star, Hayek claimed that she hadn't exercised her whole life, but now practices yoga. "I have to say, I'm pushing 50 but I feel great. I looked worse in my youth! I'm in good shape now." It's fantastic that Salma feels great; after all, that should really be the whole point of exercising, not to reach some BS goal weight.

I'm sure it's not just the yoga that's making her feel happier. Hayek's already finished up five films in 2015, including How To Make Love Like An Englishman with Jessica Alba and Pierce Brosnan. And although you'd think Hollywood would be hard for a 48-year-old woman, Hayek continues to land major roles. She credits her "luck" to karma, telling The Edit, "I’m quite short. I have an overly...wavy body. I’m not like the girl next door who is easy to cast. I don’t fit into any of the stereotypes of a woman that should continue to work." I think she's being a little hard on herself, don't you think? The world is pretty sick of stereotypes at this point.

In a video accompanying the profile on Hayek, she lists some of her female heroines — from Frida Kahlo to Malala — and goes on to describe her idea of what a heroine is, saying "the combination of somebody who's strong but very empathic towards the other." My first introduction to the beauty that is Salma Hayek came in the form of 11-year-old me watching Spy Kids for the first time. I mean, a vanity that doubles as a computer? Are you kidding me? And the more I watch her throughout the years, the more I realize that this woman kicks ass. She's 48 and still killing it, giving hope to women like me that don't exactly fit the industry's standard of beauty, all the while with a glass of wine in her hand.