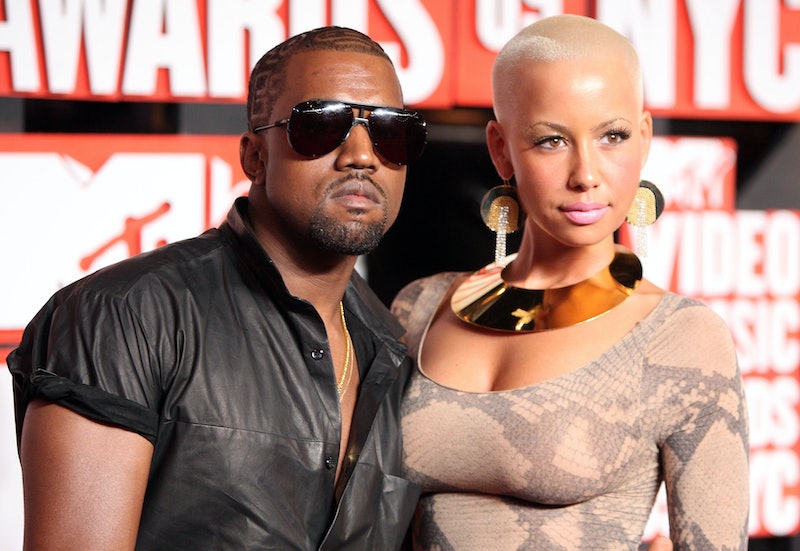 The fall out from Amber Rose's Friday, Feb. 13 radio interview (you know, the one that started her feud with Khloe Kardashian) will not die. And now Kanye West has spoken out on Amber Rose in defense of his wife, Kim Kardashian, and her famous family. Unfortunately, he did so by slut shamming Rose and making a point to claim her success is based entirely on dating him.

West said of Rose on The Breakfast Club on Friday, Feb. 20, the same show on which Rose appeared a week earlier, "She's just soaking in the moment. If Kim had dated me when I wanted, there would be no Amber Rose." He continued, "By the way, it's very hard for a woman to want to be [with a man] who's been with Amber Rose. You know what I'm saying? I had to take 30 showers before I got with Kim."

This just brings everything down to an even pettier level. To start with the first half of his statement, while many people might know Rose because of her relationship with West, she also has a modeling career, so it's incredibly harsh for him to say that she would not have found success without him. Who knows if she would have been famous otherwise.

And as for the second part where he mentions "30 showers," this is even more offensive as West implies that because he had sex with Rose he is somehow dirty. While Rose turned to slut shaming when she called Kim Kardashian a "whore," Amber Rose slut shaming West's wife, does not give him the right to slut shame Amber Rose. If we're to believe that what Rose said was so hurtful as to bring West to comment on it in the first place, then why would he not only follow suit, but bring things to a far more personal and offensive level? There's a difference between defending your wife and insulting someone you were involved with and escalating the conflict. I hate to say it, but it seems like this is far from over, and with his words West has done more than simply make the feud worse.