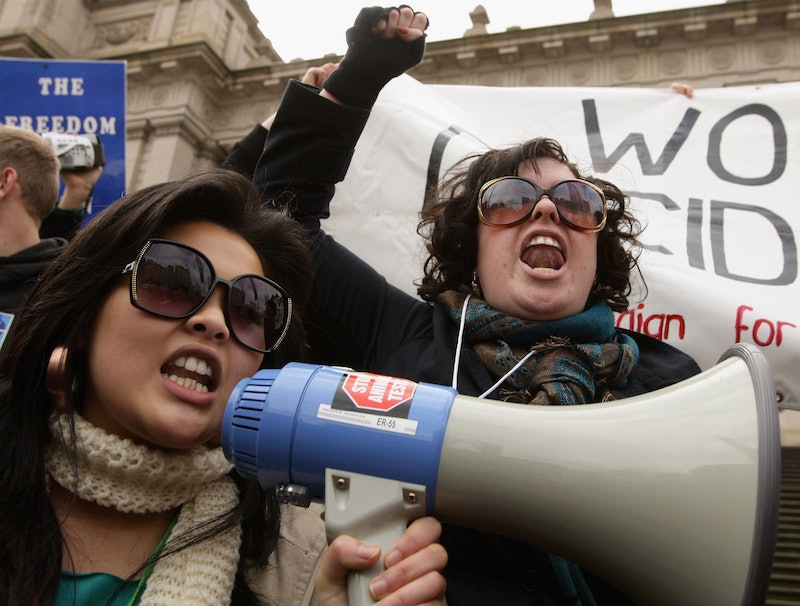 Lawmakers really can slip their agendas into anything. Ohio's budget, passed in June, is a great example of that, and included items designed to restrict access to legal abortions. Now, on Wednesday, the American Civil Liberties Union has filed suit against the state, claiming the restrictions violate the a rule in the state's constitution.

The ACLU takes issue with three of the budget amendments: The first bans public hospitals from making transfer agreements with abortion clinics. The second mandates that clinics provide patients with signs of a fetal heartbeat 24 hours before the procedure, or face misdemeanor charges. The third provision creates and gives money to a "parenting and pregnancy program" that will avoid mentioning abortion services. It also tucks aside money for pregnancy crisis centers that discourage the procedure.

The problem, the ACLU says, isn't about abortion rights: It's that Ohio's State Constitution restricts bills to a single subject. A budget bill in that state should deal only with budget-y things, such as taxes and appropriations and spending, instead of, say, abortions. Or anything but numbers, really.

“The first two amendments have nothing at all to do with budget appropriations,” said ACLU attorney and Case Western Reserve University law professor Jessie Hill. “The third is also unconstitutional because it creates and funds an entirely new government program, something that requires stand-alone legislation.”

The ACLU says that the provisions were passed in an 11th-hour move to ensure the bill "would pass easily and without opposition.”

The state's Republican lawmakers stand by the amendments, as does Ohio Right to Life executive director Michael Gonidakis. He was implicated by name in the suit because he's a member of the state medical board.

“This is nothing more than a pro-abortion legal stunt by the ACLU which ultimately will cost Ohio taxpayers significantly," Gonidkis said. "In the end, all three of these pro-life laws will by upheld by the courts ... Instead of offering common sense solutions to help women, the abortion industry, the ACLU and their lawyers choose to waste time and money on frivolous lawsuits.”

But ACLU Ohio executive director Christine Link maintains that this case isn't about abortion rights; it's about "good government."

"You don’t have to be pro-choice to understand that there are rules, and those rules must be followed," she said.

More like this
Iran Has Issued A Death Sentence Over Mahsa Amini Protests
By Catharina Cheung, Darshita Goyal and Maxine Harrison
Footballer Jake Daniels Shared His Thoughts On A World Cup Boycott
By Sam Ramsden
Amanda Gorman Shared A Powerful Message On Meghan Markle’s Penultimate Podcast
By Darshita Goyal
Kim Kardashian Is “Disgusted & Outraged” By Balenciaga’s Troubling Ad Campaigns
By El Hunt
Get Even More From Bustle — Sign Up For The Newsletter