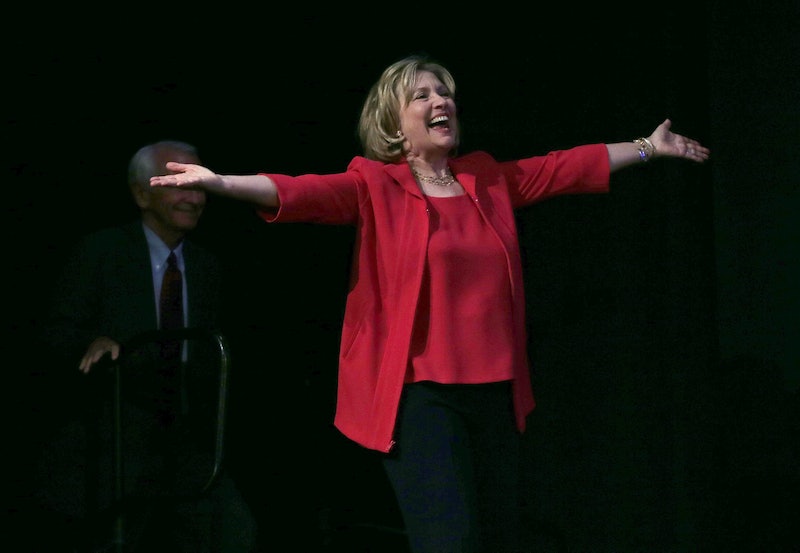 You've got to give this much to Kentucky Senator Rand Paul: when it comes to social media, he knows how to generate some attention. Even if that attention requires him to fall back on sexist tropes while violating the terms of use policies of major websites, as it turns out! Remember that Pinterest page Paul tweeted out before Valentine's Day, claiming it belonged to Democratic icon and likely presidential candidate Hillary Clinton? Well, it's no more — Pinterest deleted Rand Paul's fake Hillary Clinton page, and on the strength of its retrograde comedy alone, that's some very welcome news.

That's not to say Pinterest was necessary motivated to clean up Paul's page because of the jokes he made. Making flat, gendered jokes at the expense of likely the world's most famous female politician isn't itself grounds to have a Pinterest deleted. Nope — the way Paul went about it simply doesn't jive with the company's policies. Basically, as expertly detailed by the Washington Post's Caitlin Dewey, Pinterest's terms of service forbid users from impersonating other people or misrepresenting their affiliations, which is as clear a description of Paul's team registering under the name "hillaryrclinton" as it gets.

Unfortunately, since the page has already been pulled down, you can't go peruse Paul's rather off-the-mark humor yourself. But that might ultimately be for the best, because the jokes were a little annoying, or at the very least terribly played-out and stereotypical — multiple Benghazi-related memes, for example, including this garish offering.

Yes, that's right — the Benghazi train is still rolling down the tracks.

Clinton was also treated to a meme jabbing at her costly speaking fees, as well as a particularly sexist board detailing her remodeling plans for the White House. The joke, you see, is that she's a woman! So she wants to swap out the staid, notoriously male-controlled confines of the White House for something a little more feminine — a heart shaped pool, perhaps? If there's anything that was actively offensive about Paul's effort, as opposed to just inane, this was probably it. Aren't Paul and his team old and mature enough to get past the "OMG ladies gonna lady up the place" jokes? At the very least, they ought to be.

The page ended up surviving a mere four days or so before Pinterest pulled the plug, though given how high-profile its target, that delay comes as something of a surprise on its own. Rest assured, this won't be the last time that Paul takes a jab at Hillary, nor the last time he tries to flex his internet-age awareness to do so. But hopefully, he'll at least stick to relevant issues next time, instead of regressive, sexist tropes.