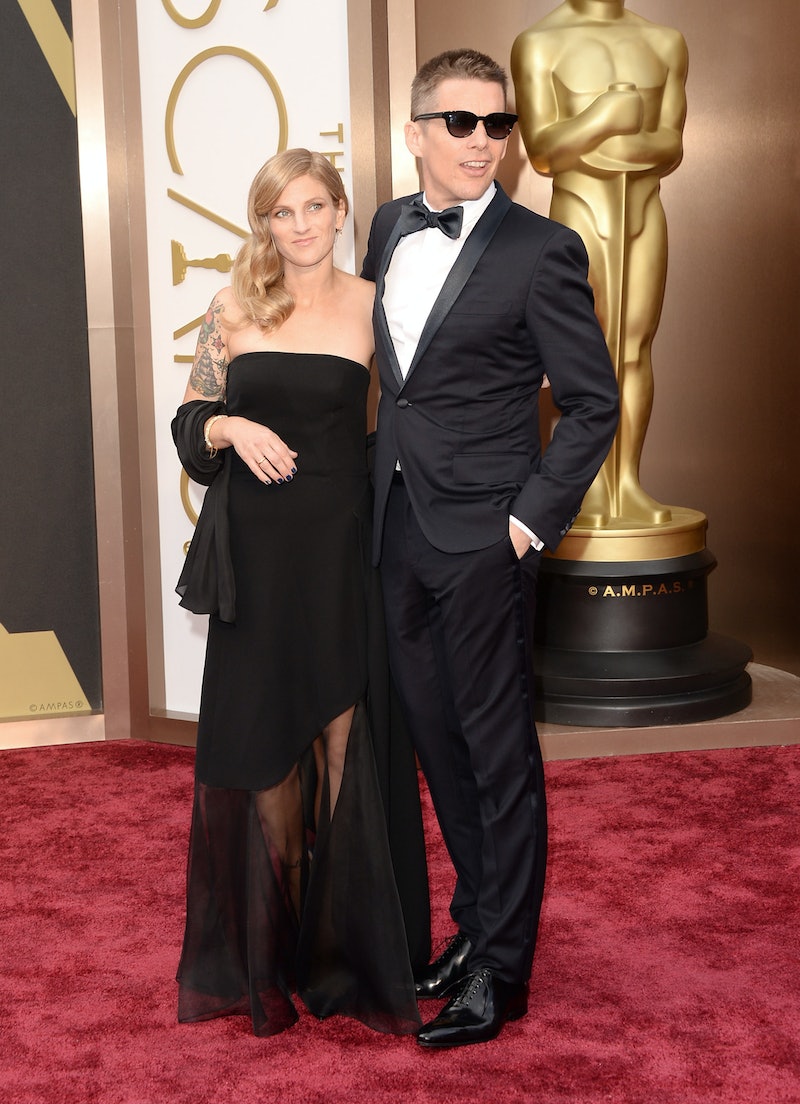 What could be better than seeing happy couples on the Oscars red carpet? While watching the fashion and style of individual stars is a staple on one of Hollywood's biggest nights, it's always exciting to see how significant others coordinate both their outfits and their PDA. Seeing as Ethan Hawke is up for a nomination for Best Supporting Actor in the film Boyhood, we can be sure to see him on the red carpet — along with his date, who will likely be his wife Ryan Hawke. Some fans of Ethan might be curious to know a little bit more about the lady in his life.

As it turns out, Ryan is actually Ethan's former nanny for his children, which may be a surprise to some. The couple met while she was employed as a nanny for his two kids while he was still married to Uma Thurman, according to the New York Daily News. After Ethan Hawke and Thurman's split in 2004, Ethan and Ryan later tied the knot in the summer of 2008. Whenever they have been spotted out and about, like on Father's Day last year, they seem like every bit the happy family.

Other than her past work as a nanny, interestingly enough, it looks like Ryan Hawke also has a bit of acting experience under her belt, too. According to IMDb, she made a cameo in one of Ethan's movies that he directed, The Hottest State. In the movie, released back in 2006, it looks like Ryan made a cameo as a "Williamsburg Hip Girl." Though it doesn't seem like her part was huge in the movie, it is cool that she does share a bit of interest in dabbling in acting like her husband.

Their relationship has not been without controversy, though. There is some speculation that the couple began dating while Ethan and Thurman were still married. The actor didn't exactly help his case when he made some vague yet shocking extramarital affair comments in 2013 about sexual fidelity not being the most important aspect of a relationship. Though the alleged cheating is still a rumor, it's a rumor that has followed him throughout their courtship and even now through their marriage.

But there is no denying that Ryan is nothing but supportive of Ethan, though. We're talking about a woman who got a tattoo with his initials on her arm above an illustrated key and lock, after all. And of course, she has a history of being with him side by side for important events. So it should be little shock to see her on Sunday locked in arms with him and later cheering him on for his hopeful Oscar win.

More like this
Twitter Is At Odds Over Taylor Swift’s Possible ‘All Too Well’ Oscar Run
By Brad Witter
What Is Brad Pitt’s Net Worth? The Bullet Train Star Now Makes 8 Figures Per Film
By Hugh McIntyre
Nicola Walker’s IRL Husband Is No Stranger To TV Screens
By Darshita Goyal
Who Is Bad Bunny Dating? Gabriela Berlingeri's Vocals Are Featured On His Song "En Casita"
By Radhika Menon
Get Even More From Bustle — Sign Up For The Newsletter