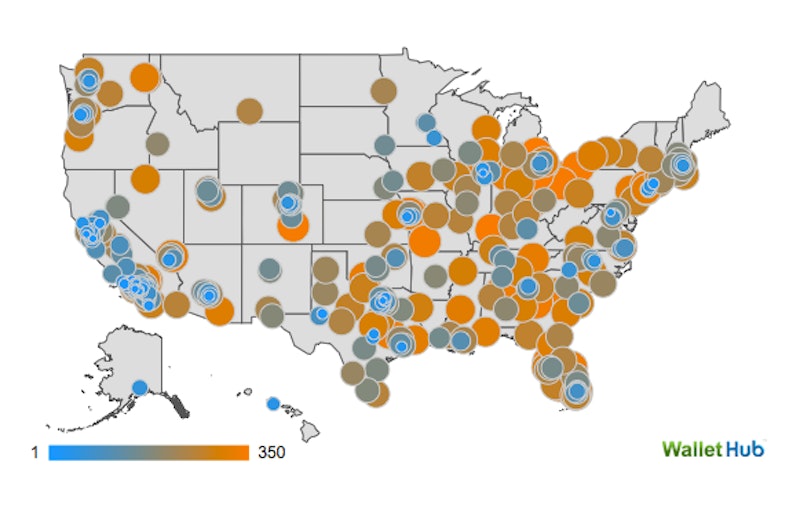 The economic landscape in the United States has changed significantly since the recession of 2008, but only a small portion of the population has seen economic growth. How small? Well, just the top one percent. The gap between the rich and the poor is wider than ever. A WalletHub study ranked U.S. cities from most to least economically diverse, concluding that the cities that are the most economically mixed are also the healthiest.

WalletHub's findings are based on a post-recession landscape where if you're not in the one percent, then you're in the bottom 99. There's virtually no in-between. The reason for that is, according to the study, between 2009 and 2012, America's top one percent gained 95 percent of all economic growth after the Recession.

There are some benefits to high levels of economic disparity in a city. Wealthier residents generally invest more in the local economy, which allows the city to invest more in its public education system. And the ones who would benefit the most from this would be lower-income families, whose children would be able to receive the same quality education as their higher-income counterparts.

According to Bree L. Dority, assistant professor of economics at the University of Nebraska-Kearney, diversity might even be necessary. She wrote for the study's"Ask the Experts" portion:

From this, WalletHub determined that the cities made up of the most diverse economic classes were the healthiest. The ones with the most uniform economic makeup, whether predominantly wealthy or poor, were the least healthy. So where does your state stand?

California appears to be consistently diverse; 13 of the top 20 most economically diverse cities on the list are in California. These include Orange, San Mateo, Costa Mesa, and San Jose.

Flint, Michigan Is The Least Diverse And The Most Poor

Education Is Also A Major Factor

California May Be Diverse, But East LA Is Not In Terms Of Education

The study found that more than half (54.03 percent) of the population in East Los Angeles, California, did not graduate from high school. It also had the lowest concentration (5.52 percent) of people with a bachelor's degree or higher.

The City With The Most Educated People Is Not A Surprise

It's Cambridge, Massachusetts, where a whopping 73.99 percent of the population have a bachelor's degree or higher. That's to be expected, though, since Cambridge is home to top schools Harvard University and Massachusetts Institute of Technology.

The study ranked the top-ten cities with the most economic diversity as:

As for the least?