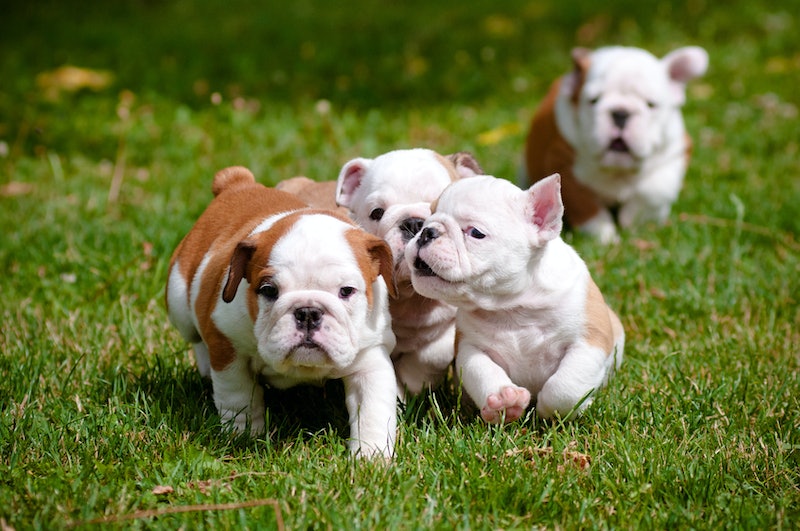 According to her Tumblr, Canadian musician Grimes put a puppy on her tour rider. Yes, a real puppy — the kind that has a raspy, underdeveloped bark and nibbles on your fingers like the prince or princess of furry creatures he or she is. The Hairpin's Jia Tolentino unearthed this gem, pointing out that it's only a single drop in the bucket full of "very important corn starch," Rough Rider condoms, and framed photos of Princess Diana. And she's right to an extent, but as someone who's worked as a runner for artists (see: the person who buys all the ridiculous stuff on that rider), this request nearly sent me into a spiral of panic and a rash of hives — and I don't even do that job anymore.

When an artist who's generally well-liked does something that appears as if it came out of the first round of "adorkable" New Girl Season 1 promos, it's understandable that folks find it cute or strangely endearing. After all, she most of her rider is concerned with keeping it green (kudos!) and the request does add "if possible" and "lol" to the call for "one cute bulldog, french bulldog, pug, or pomeranian (or other cute animal such as a chinchilla or pekanese) to visit and hangout, but who gets to leave before too much loud noise is heard so that he or she does not hurt their ears." So, maybe she's kidding and it's cute, right?

Totally. Until you're the caffeine-addled recipient of that piece of paper with a list of things you have no idea how to retrieve. Most likely, before you even receive a to-do list bound to send you across town, uptown, downtown, and to the outskirts of town before lunch, some arrangements have been made — in this case, puppy arrangements. Calls to different dog-borrowing services (they do exist) will have been placed, and you'll have a plan set in place for picking up the ball of furry joy ahead of time. Whew.

Except that nine times out of 10, that plan will fail. The puppy lender will have a policy about bringing the dogs to concert venues or they'll insist that you entertain the pup for more than the few hours before the artist's set time or he or she will see your face and decide "You know what? This person looks like she needs a complete mental breakdown today, and I'm just the man for the job." You will stand in the middle of the street, wringing your hands and begging strangers for their already-lit cigarettes even though you don't smoke, all the while knowing that the failure to bring back a furry companion is on you and that hell fire, brimstone, and whatever's in Kombucha will rain down on you when you return empty-handed.

Then comes the bargaining stage. You can fix this... you whisper to yourself as the guy in coming out of Starbucks drops a quarter into your half-finished coffee — he's mistaken you for a hallucinating beggar. At that moment, panicked potential solutions racing through your head like puppies through a dog park include: buying a stuffed animal from the toy store and hoping the artist is too busy backstage to notice; harassing locals walking their dogs near the venue in hopes they're trusting enough to let you "borrow their dog for a famous musician" for a few hours; capturing one of the squirrels in a nearby park and claiming ignorance when the artist realizes it is not an acceptable alternative chinchilla; dressing yourself up as a dog and perfecting the art of ankle-nibbling; commuting an hour back to your apartment so you can let the artist play with your own dog, despite the fact that he is not one of the specified breeds and occasionally pees on people's legs when he gets excited about new places.

This is the mental toll of a tour rider that jumps from "baby oil and 24 long stem roses" to "bring me a living, furry companion." Remember when "no brown M&Ms" was the measure of musicians' excess? Someone bring me those M&Ms. I'm going to need them if I'm going to find Grimes a temporary puppy.