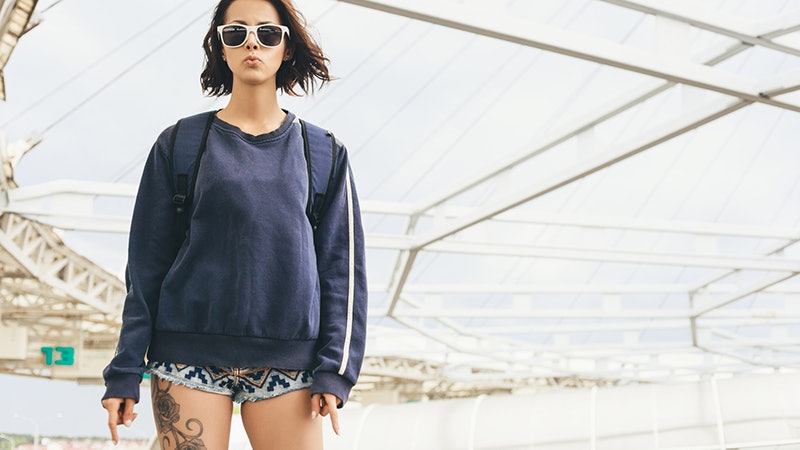 When I turned 18, I abruptly when to a sex shop and purchased my first vibrator. It was navy blue and sparkly, and it was annoyingly loud, it was also one of the first purchases that I actually regretted in my new adult life. The next stop on my "Let's do everything that 18-year-olds are legally allowed to do" list was to get my first of many tattoos. As if being black and female didn't give me enough stereotypes, having tattoos came with a wave of judgment from seemingly intelligent people. It's like there is a laundry list of assumptions that people always seem to get wrong about people with tattoos.

In 2001, every girl on my college campus were getting lower back tattoos. Unfortunately, it seemed everyone without a tattoo on their lower back considered it to be a sign of promiscuity. "Only sluts get tattoos on their lower back" and "You can tell she's a party girl because she has a tattoo on her lower back." As a young feminist, I was just beginning to understand that not all women were feminist and sadly enough, we were our own worst enemy to our cause. For irony, for the sake of getting a tattoo, and for all my friends that were dubbed sluts because they had a tattoo — I tattooed the woman's symbol, the sign of venus, on my lower back. It would be a tattoo only I understood.

Which is exactly the point. A tattoo allows me to permanently express myself and hold a moment forever. My tattoos are a bouquet of memories that I've shared with people I love, people I used to love, and most importantly, memories with myself. Though people are getting more open minded about body ink, tattoos still hold a negative stigma, at least somewhat, in the Western world. Personally, I think judging someone on their fashion statements should have gone out the door with the Reagan administration. It's definitely not just the un-tatted that are throwing shade either — I'm sure you've heard someone with ink say "His/her tattoos are so stupid" before. You don't need to understand someone else's tattoo. If you think it's dumb or obnoxiously trendy, well, then just be glad that it's not on your body.

In honor of everyone who's received parental lectures on, snide comments about, or sideways glances at our body art, here are nine things that people always get wrong about people with tattoos.

1. We've All Been Incarcerated

While my stick and poke tattoo certainly looks like it was performed in a correctional facility, it was not. Fact: Some prisoners have tattoos. Fact: Not all people with tattoos are prisoners. I mean, really, that is the silliest assumption I've ever heard.

This notion is incredibly false. I've worked with architects and financial whizzes holding senior management titles that are completely covered in tats. If you're amazingly talented and qualified, it shouldn't matter what you look like. Sure, many employers still find tattoos "unprofessional," especially if you're dealing with the public. For now, that's why they invented tattoo cover-up, y'all. Get that job, get that raise, and unleash your inked up sleeves once you've made your way to the top.

3. We Make Loads Of Spontaneous Decisions

It may look to you that someone's tats are completely spontaneous, but most of us like to plan them out and agonize over the size, placement, and detail for months. I'm someone who has a secret plan almost all of the time; I may seem spontaneous, but that's only because you aren't in my head. Why do you have bangs? You probably agonized about it for several months. Every time you saw someone with bangs, it reminded you of how badly you wanted bangs. Finally, after months of pining, you got bangs. That's pretty much how people get tattoos — which is good, because I hear they are permanent.

4. We Regret Our Tattoos

Obviously, there are a lot of regrets out there or else the laser tattoo removal business wouldn't be raking in serious cash. Not all of us are regretting our ink though, and insinuating that we do only goes back to the fact that we don't all just make spontaneous decisions about our ink. For many of us, our tattoo reminds us of a time in our lives that has passed, even if it's not something we're completely connected with anymore.

While getting stitches on my Achilles tendon (which hurt like hell), the doctor said "Come on, you can't be in that much pain. Look at all those tattoos!" Gee, I guess because I have tattoos I wouldn't mind getting hit by a bus either. You know, since I love pain so much.

6. We Have Unconventional Lifestyles

Not all people with tattoos are guzzling PBR's at a Lower East Side sex party until 6 am on the regular. Loads of people with ink are on that straight and narrow path. Since tattoos are for everyone, regardless of your social life, they never discriminate — and neither should you.

Yes, I know. It's a giant centerpiece on someone's arm and obviously, they must want everyone to ask them about it and discuss its deep meaning, right? Wrong. My tattoos are for me and I'm always happy when people compliment them, but it's definitely not the reason I paid all that money and sweated in a leather chair with the sound of needle to skin for several hours.

8. We Are All Tattoo Connoisseurs

More often than I'd like, someone asks me where I got my tattoo. This always leads to a conversation that I am under qualified to have. I have a few favorite artists that I like, but since I'm NOT a tattoo artist, I really don't have any clue about how sterile a random tattoo parlor in Phoenix, Arizona is going to be. I'm happy to tell you my go-to spots, but I certainly haven't tried them all.

Ugh, if I had to design my own tattoos, I would just be covered in fluffy clouds and stick figures because that's all I can draw. Thank goodness there are great artists out there, because a large portion of people with tattoos suck at drawing. As much as I'd like to take credit for an awesome design, I, like many, have to give credit to a tattoo artist that knows what their doing.

More like this
The 10 Biggest Tattoo Trends Of 2023
By Carolyn Steber
This Scandi Beauty Brand Is Basically Hygge In A Bottle
By Justine Knight
All The Products Hailey Bieber Used For Her Birthday Makeup Look
By Olivia Rose Ferreiro
10 Makeup, Hair, & Skin Care Gifts That Beauty Lovers Will Drool Over
By Erin Stovall
Get Even More From Bustle — Sign Up For The Newsletter