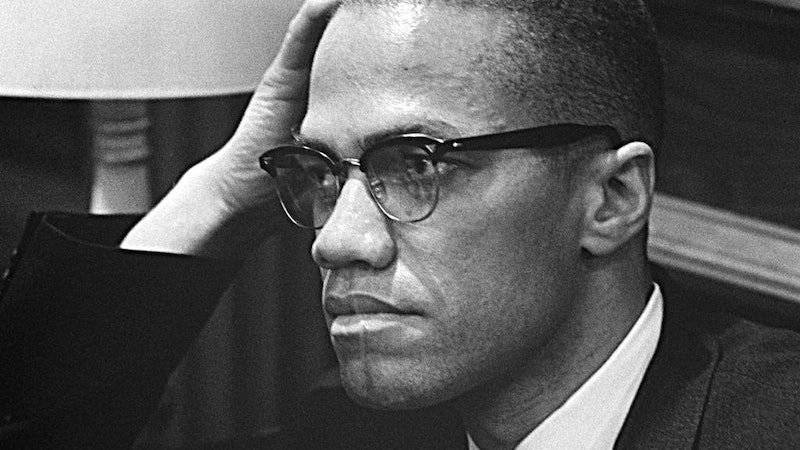 Saturday marks the anniversary of a hugely significant, tragic moment. Civil rights leader Malcolm X was assassinated 50 years ago, the end of a man, and a life, that had had an indelible impact on American society. Hailed as a unrelenting, ultimately just force for black empowerment by his appreciators, and cast as a threatening proponent of violence by his denigrators, there are few historical figures who mean such vastly different things to different people. Now, on the occasion of his terribly young death — he was shot dead at the age of 39 — it seems like a prefect time to look back. Just how did that fatal day unfold?

Back in 1925, Malcolm X was born under a different name, one he eventually eschewed: Malcolm Little, a native of Nebraska's capital city of Omaha. Over the next nearly 40 years, Malcolm X became one of the country's most prominent black voices on the fight against white supremacy — with force, if need be. Just as you'd expect, he paid a heavy cost for this. Along with his decision to convert to Islam (and join the controversial Nation of Islam), countless white Americans of his day condemned him as a threat and a menace. And even worse, his decision to leave the Nation of Islam earned him the hatred of many former cohorts.

He'd Been Threatened Before

Some essential background — following his tumultuous split from the Nation of Islam, he was the subject of several death threats, as well as an attempt to bomb his home. As detailed by Democracy Now, he described this attempted killing in February of 1965, just one week prior to his death.

My house was bombed. It was bombed by the Black Muslim movement upon the orders of Elijah Muhammad. Now, they had come around to — they had planned to do it from the front and the back so that I couldn’t get out. They covered the front completely, the front door. Then they had come to the back, but instead of getting directly in back of the house and throwing it this way, they stood at a 45-degree angle and tossed it at the window so it glanced and went onto the ground. And the fire hit the window, and it woke up my second-oldest baby. And then it — but the fire burned on the outside of the house.

The Elijah Muhammad that Malcolm X referred to was the leader of the Nation of Islam at that time, whose tawdry personal behavior had (partially) inspired him to leave the organization. His claim that the bombing (and ostensibly his assassination) was ordered by Muhammad has been the subject of furious speculation ever since. As he famously told CBS' Mike Wallace, on leaving the Nation of Islam: "I probably am a dead man already."

Fresh from the prior attempt on his life, Malcolm X remained undeterred — he was still going to spread his word as loud and wide as he could, and went to speak at Harlem's Audubon Ballroom.

As he gave a speech to throngs of his followers, with his wife and four children in attendance, Malcolm X was fatally shot. According to The New York Times' 1965 report on the incident, his body was struck by two different calibers of bullets, as well as shotgun pellets, fueling obvious suspicion that multiple people were involved in the operation. A Nation of Islam member named Thomas Hagan was ultimately apprehended, tried, and convicted for the killing, which he admitted to having planned with four other people in the organization (though he insisted that two other people later arrested for it hadn't been involved).

As CNN details, Malcolm X's wife would later describe the scene to a Manhattan grand jury.

I heard several shots in succession. I got on the floor, and I pushed my children under the seat and protected them with my body.

So, Why Did It Happen?

The most prevalent, popularly held interpretation of Malcolm X's assassination happens to be the one that requires the least mental legwork. Basically, it goes like this: Malcolm X split with the Nation of Islam after learning damaging, hypocrisy-exposing personal information about its leader, depriving the group of their highest-profile spokesperson.

And, by one means or another, Malcolm X lost his life as a result. Regardless of whether Muhammad had directly ordered X's killing, or whether those in his organization simply took their cues from the violent rhetoric of higher-ups (Louis Farrakhan admitted this much to Mike Wallace in 2000), his assassination was spurred by this falling out.

There is another theory, however, that's gained some purchase through the years — the possibility that the government underplayed its role in regard to Malcolm X's death. This sounds incendiary by today's standards, but the state of affairs relative to the black power movement of the late 50s, 60s and 70s was altogether different. It was aggressive and widespread — civil rights leaders were subject to government surveillance and attempts to destory their credibilities in the public eye, like when the FBI attempted to coerce Martin Luther King, Jr. into killing himself. Yup, that happened.

The government files on his death still aren't public record, as the Boston Globe notes. You can appeal for them to be released here.