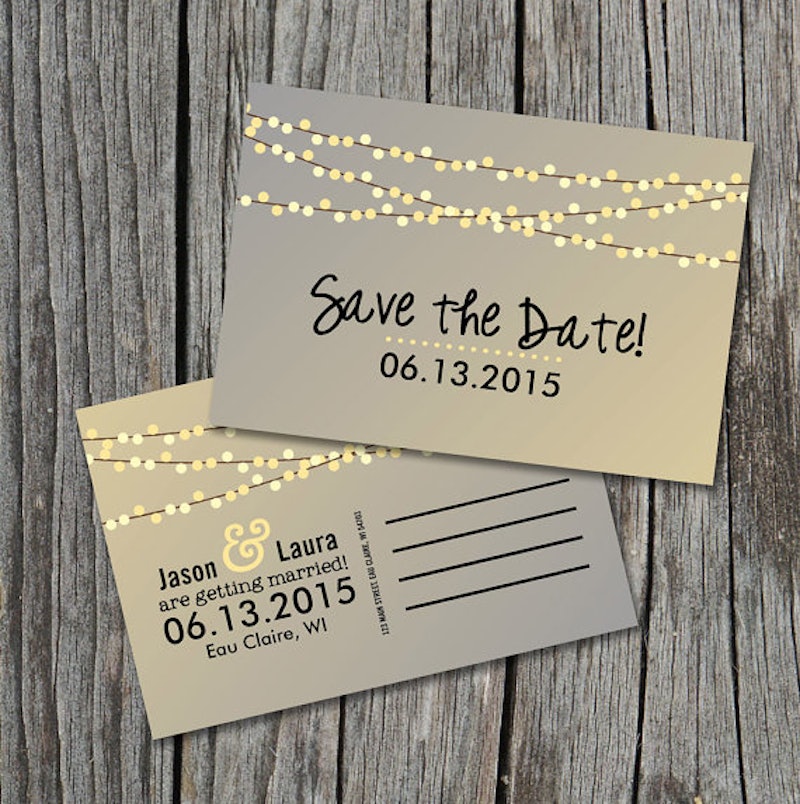 As soon as there's a sparkly object on your finger, it's tempting to start telling everyone that you've set a date and found your venue. Your mother and future mother-in-law have likely started telling all their old family friends to save the date. Before you end up with a wedding of 500 guests––including your kindergarten teacher and your high school ex's mother––let us help you set some parameters to keep everyone (including you) happy with your guest list. Or just have a small wedding...it solves lots of problems!

Yes, we know math isn't fun. But it's imperative to know how much you're spending before you decided to invite your entire sorority. This is especially important if you're planning on paying for the wedding entirely on your own. Traditional advice tends to say that whoever pays gets the most control of the guest list, but these days, more couples are waiting until they're established financially to tie the knot. If you're footing the bill, feel free to divvy up the guest list however you please. If either set of parents want to invite extra people, let them know how much each extra person will cost. Regardless of what you decide to do, we suggest talking with both sets of parents to gauge expectations. If your mother had a dream list, how many people would be on it? How many of those guests are absolute necessities? These are good conversations to have before putting down deposits, and they may help you avoid those later fights with Mom.

Don't Be Afraid To Say No

Once you set those rules and boundaries, you have to actually follow them. If you decide that no one gets a plus one unless they're living with their significant other or engaged, then that's the rule...and even your oldest friend has to follow that rule. Bridal Guide suggests making tiered lists, and it's a great idea. The top tier is the people who absolutely must be there, while the bottom tier can include those you've lost touch with and family friends your parents insist on inviting. In general, it's wise to limit your plus ones, as it's a great way to avoid letting the guest list get out of hand.

This may be unpopular, but it bears saying––limiting the children on your guest list will cut it down quickly, especially if you're at an age where many of your guests have children. Set an age cutoff and stick to it (12 seems to be a popular cutoff age). If you're getting married in the evening and your reception will go until midnight, the elementary-aged crowd won't be able to stay up that late, anyways!

Be Honest With Yourself...And Don't Get Guilted Into Anything

Yes, you had some wild days with your college roommate. But if you see her once a year and never talk otherwise, you don't need to invite her––she's simply not in your life anymore, and that's fine. You don't need to feel guilty about that. Though the rules of etiquette suggest that if you were invited to Joe's wedding, you should invite Joe and his wife to yours, that rule doesn't stand if you're having an intimate wedding or destination wedding. And, again, if Joe's wedding was a few years ago and you haven't seen his wife since their nuptials, you don't need to feel guilty about inviting them. A good rule of thumb? If you haven't talked in six months, you don't need to invite them. No guilt necessary!

More like this
Phoebe Dynevor Serves ‘Bridgerton’ Underboob In Stunning Floral Gown
By El Hunt
These 4 Zodiac Signs Make The Best Bridesmaids
By Nina Kahn
The Zodiac Sign Pairs Most Likely To Have A Sibling Rivalry
By Kristine Fellizar
These 3 Signs Are Most Likely To Be In A Love Triangle — Here’s Why
By Kristine Fellizar
Get Even More From Bustle — Sign Up For The Newsletter
From hair trends to relationship advice, our daily newsletter has everything you need to sound like a person who’s on TikTok, even if you aren’t.