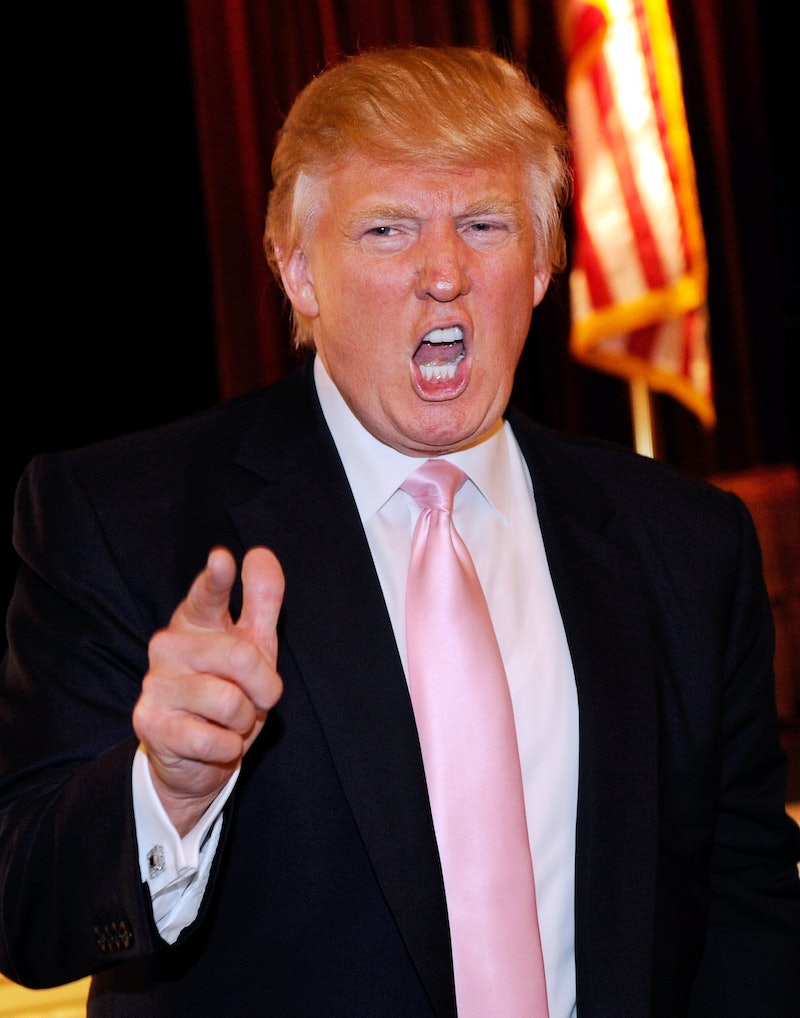 The presidential campaign season is right around the corner, and candidates on both sides of the aisle are getting their ducks in a row to vie for the White House. Of course, as in any general election, you've got your contenders — your Hillarys, your Jebs, maybe a Rand here or there — and your also-rans, like GOP neurosurgeon Dr. Ben Carson, or (sad to say) Vermont Senator Bernie Sanders. And below those, you have the pretenders. Here's what a Donald Trump 2016 presidential campaign would look like.

Why bother, you ask? It's a fair question, given the naked obviousness of Trump's desperate, dismal attention-seeking — dude isn't going to run for President, just like all those other times he didn't. But clearly, this is one ostensible billionaire who just wants to keep playing make-believe. Maybe he'll finally give up the act if we can all provide him with some Trump-themed fanfiction?

Suffice to say, it's not all that hard to imagine what a Trump candidacy would go. The only thing that is hard to imagine is anyone treating it with a shred of seriousness or respectability. Here are some scenes from the campaign trail you could expect to see — if, of course, he weren't too scared to run.

He Tries To Look Tough By Cursing

If there's one thing Trump has in great supply, it's juvenile bombast. You only need to read through his social media trail for a few minutes to stumble upon examples of this — he applies a serial braggart's level of unearned authority to almost every statement he makes, and seems to believe the ol' Trump tour-de-force will carry the day.

But Trump isn't a politician, and has never had to contend with life on the really big stage — the kind of life where pounding the podium often doesn't get you anywhere. For example, take his 2012 explanation of how he'd convince OPEC to keep oil prices low.

We have nobody in Washington that sits back and says, "you're not going to raise that fucking price!"

He also gave some insight into how he'd interact with China, one of the United States' most complex and fraught international relationships: "Listen you motherfuckers, we're going to tax you 25 percent!" Hail to the chief! By this time next year, Trump will be shoring up primary support by telling ISIS to go fuck itself.

Donald Trump is, if nothing else, a uniquely strange composition. Massively wealthy, yet overtly thin-skinned. A reality TV star craving unearned credibility as a hard newsmaker. The kind of person who craves relevance so much that he doesn't mind how ridiculous his chronic faux-candidacies make him look.

There's maybe no better way to get a sense of these facets of his personality than to check out his Twitter history, rife with prickly condemnations, angry outbursts and sheer inanity.

Anybody got any money how long it'll take him to start dishing out relationship advice to Katy Perry? Oh, wait, he... already did that.

So Many Hair Jokes

There's only one thing on this list that's truly undeniable: any Donald Trump candidacy is a boon for lazy, hacky comedy writers everywhere. How many jokes can you make about how bad Donald Trump's hair is? A slew that spans over three decades, apparently.

Trump's been known to entertain questions about his infamous coif before, and he even submitted himself to a Comedy Central roast back in 2011. But there's no telling if he'd be willing to get in on the fun were he actually running — when this guy gets into political environments, he doesn't seems quite so willing to laugh at himself. You need look no further than his reaction to President Obama's withering jokes at his expense at the White House Correspondent's Dinner.

He'd Sooner Drop Out Than Get Thumped

Trump is either lying to us or lying to himself when he boasts of how he'd sweep into Washington. Quite the contrary, in reality, he'd get beaten like a broken drum. But he's never been one for those big accountability moments — we never did hear what his alleged investigators in Hawaii turned up on President Obama's birth certificate, did we? — and as such, you can bet your life savings he'd never actually hang around in a primary process that he figured to lose badly.

Basically, a Trump candidacy would almost by necessity end before it had really begun, owing to the man's considerable ego and reluctance to look defeated. The only way you'd see Donald Trump's campaign even make it to Super Tuesday, say, would be if he were inexplicably leading the field. And that's the one scenario that's too ridiculous to entertain, even here.