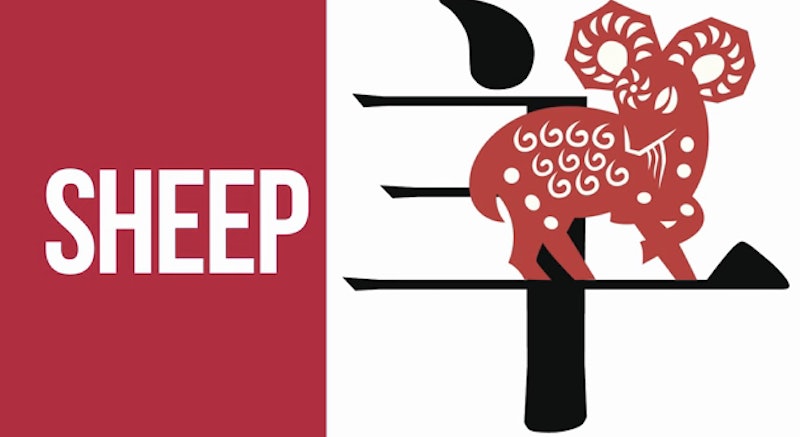 A belated happy Chinese Lunar New Year. For those of us who lack the full scope of Chinese zodiac knowledge, BuzzFeed has provided us with a crash course titled “What Chinese Zodiac Sign Are You?” Because the more you know, right?Something to point out for anyone confused about this year’s symbol: According to article from NPR titled “Whatever Floats Your Goat,” this year’s zodiac animal is the point of some debate. A goat, ram, and sheep have all been used to represent this 2015’s zodiac. And while the English translation of “yang” in ancient Mandarin does in fact mean goat, in contemporary translations all three can be correct, says Lala Zuo, a Chinese language and culture professor at the U.S. Naval Academy in Maryland.

Over at Quartz, Nikhil Sonnad writes that the Chinese dictionary definition of “yang” comes up as “A grass-eating mammal, usually horned, of which there are many types including mianyang, shanyang…” But as we scramble for the correct terminology for this year’s zodiac, he adds that “Chinese speakers seem happy to let it remain an open question.” Fair enough.

Want to know which zodiac applies to your birth year? Check them out below, and then watch the video at the bottom to see what each animal represents in your personality.

3. Year of the Tiger

4. Year of the Rabbit

5. Year of the Dragon

6. Year of the Snake

7. Year of the Horse

8. Year of the Sheep

9. Year of the Monkey