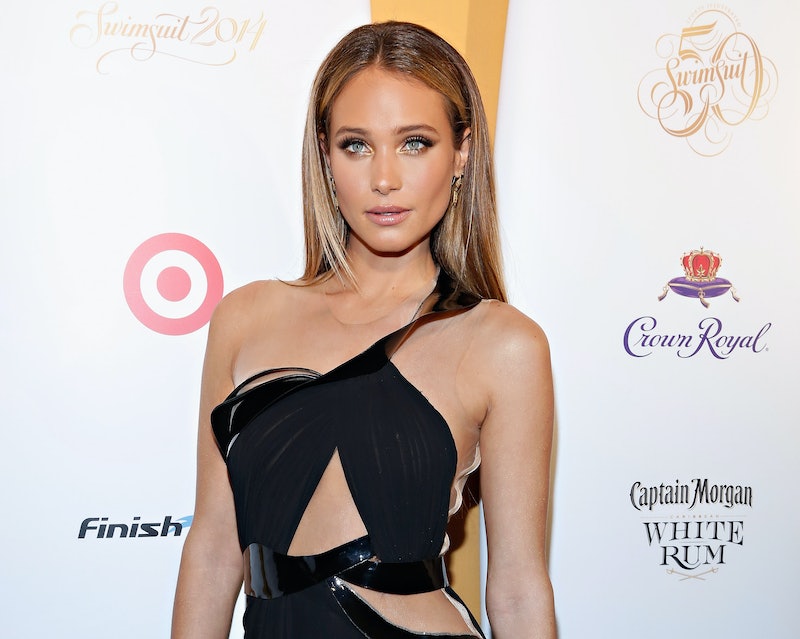 You might not have known Hannah Davis' name two weeks ago, but you've probably heard it by now. Or, at the very least, you've seen a certain photo of her that has caused some controversy. Hannah Davis recently landed the cover of Sports Illustrated 's swimsuit issue, and if you're wondering if Davis knew her bikini tugging pose on the cover would end up getting people talking quite so much, she didn't. "You know what, that was my third year shooting, and I’ve shot quite a few pictures where it was a little more revealing — even a topless picture just sort of covering myself — so I never thought that specific picture would create so much discussion," she says at a Thursday night event at the W Downtown.

That said, controversy or not, Davis is honored to have graced the highly coveted cover. She explains, "The women who have graced the cover are people like Tyra Banks and Heidi Klum and women that I've looked up to for so many years, so to be in that group now is pretty awesome. Surreal."

The model's pose wasn't the only thing that got people talking about this year's issue: 2015 was the first year to feature a plus size model with the inclusion of model Ashley Graham. As if it wasn't an honor enough to get the cover, Davis also thinks it's great that this change came into effect in her issue. "I think that it's awesome," she says. "I think SI has always used a pretty great range of women in terms of sizes and stuff. I don’t think that beauty is a certain size, so I think that clearly she’s just a beautiful girl. Curvaceous. And SI loves curves, so it's perfect."

Another thing about the annual swimsuit issue that is controversial to some, is whether it's exploitative to women to dedicate a month of the magazine to women wearing tiny bikinis. Davis makes her views clear on this topic: "I think that, well, it's a swimsuit issue, and I think that people should take it a little lighter. It's supposed to be sexy, empowering, strong, healthy women on the cover, and I think that that’s what this year was all about."