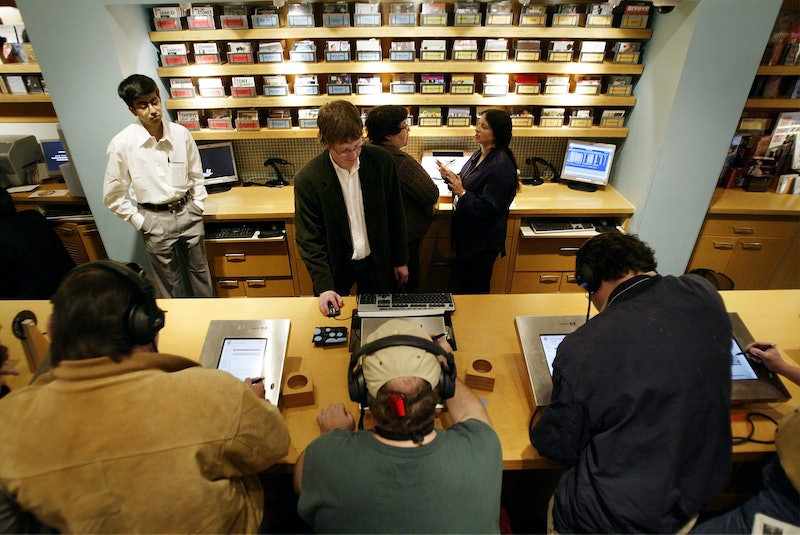 It truly is a sign of the times: Starbucks is ending its CD sales. The coffee chain is one of numerous retailers affected by slumping CD sales, which saw an overall decline of 15 percent last year. Sales have now fallen to record lows after consistently dropping, hitting just 140.8 million units sold in 2014. In fact, music is so intangible at this point that streaming services seem to be taking the place of actual mp3 files — so it comes as little surprise that Starbucks would choose to nix its CD offerings.

Music has always been a key component at Starbucks. We are looking for new ways to offer customers music options.

Starbucks notoriously began its first foray into music with Kenny G, who allegedly also helped create their frappuccino. Somehow, the smooth jazz saxophonist got in on the ground floor and was one of Starbucks' first investors. Since then, the coffee conglomerate has acquired a music retailer, expanded that to a record label (which it handed over to Concord Music Group), and crafted its own Sirius XM station for mellow coffee shop tunes played at a respectable volume.

It celebrated the decade anniversary of Alanis Morissette's breakthrough album Jagged Little Pill by releasing an exclusive acoustic version and holding an in-store concert with Morissette.

Starbucks will put a hard stop to CD sales at the end of March, which means you have about five weeks to snatch up all those easy listening tunes and maybe the Frozen soundtrack. Starbucks has stayed relatively mum about plans for their next music venture, though they have no plans to discontinue their free music downloads.

Though modest, vinyl sales are on the rise, prompting some to speculate that Starbucks is setting its sights on bigger discs in the form of actual LPs. The fact that counter space is generally at a premium at most Starbucks makes this plan highly unlikely, though the move would certainly boost Starbucks' hipster street cred — something it's been lacking since the third wave coffee movement took over.

For all we know, Starbucks may be consulting with their surprising moneymaker — Kenny G — as it plots its next move.

More like this
Is The Insta-Famous Always Pan Actually Worth It?
By Jessica Goodman
Starbucks Released New Menu Items For The Summer
By Emma Garza
This TikTok Hard Seltzer Hack Involves A Milk Frother
By Alexis Morillo
On TikTok, Orange Wine Is The Varietal Of The Summer
By Madeleine Aggeler
Get Even More From Bustle — Sign Up For The Newsletter