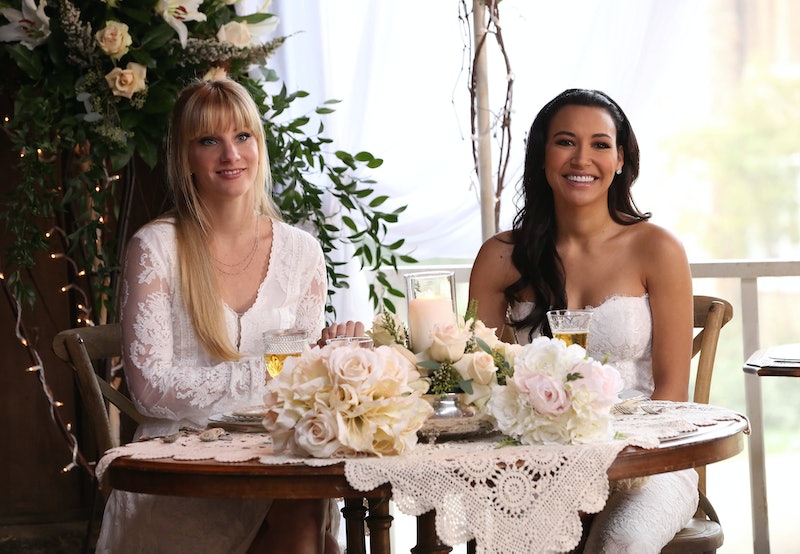 You hear that? That's the sound of every Klaine and Brittana shipper's mind and heart bursting with joy. On Friday night's Glee episode "Wedding," that's exactly what happened as both Brittana and Klaine tied the knot at the same time in a surprise double wedding. You maybe asking yourself a few questions: How on Earth did Klaine reunite so quickly? How did Santana agree to a double wedding? How did Kurt agree to not being able to plan his own wedding? Well the answer to all of these questions could just be answered by saying "Meh, it's Glee! Don't sweat the details!" But if we're all being honest, it was about time for both couples to tie the knot and waiting just didn't feel right anymore (Urgency at the end of the series helps, too). What resulted was a joyous, beautifully romantic wedding that fulfilled most of the demands and hopes and dreams of fans around the world.

The proceedings began in the best possible way: With Brittany's mom explaining that she wanted the couple to get married in the barn where Brittany was born. Her story of going into labor was so painfully awkward, weird and hilarious, and totally perfect for Brittany. From there it was a non-stop fun and frolicking time, even when the mere thought of Sue's presence threatened to derail the proceedings. But the wedding was a total success, complete with wonderful and romantic surprises.

Brittany faced pre-wedding jitters, Santana had a showdown and a reunion with Sue thanks to Sue convincing Santana's abuela to come to the wedding, and we were treated to a wedding dress fashion show! But the best moment came when Brittany (with the help of Sue), surprised Kurt and Blaine with tuxes and offered them the chance to get married at the same time as her and Santana. Brittany explained that Kurt and Blaine's relationship was her inspiration and gave her the strength and courage to be with the woman she loved.

After quelling Kurt's doubts about the ceremony, including the possible Santana objection that never came, she convinced Blaine who was easily able to convince Kurt.

The entire barn of guests, including Burt Hummel who was officiating the wedding, were in shock over the surprise double wedding, but the shock quickly became pure happiness. And the best part about the entire night? The vows all four lovers gave their respective spouses.

"Kurt: Blaine, I’m a man who’s always lived in the shadows. And everyone who’s come into my life has always tried to pull me out into the sun or push me back into the darkness.

Blaine: I honestly thought that I would never find real love.

Brittany: The world’s been so scary and confusing. It was just too fast, made me feel dumb just because my brain worked differently.

Kurt: And then you came along. And even if someone had told me that it wasn’t gonna work out and that at the end of all of our struggling and all of our work, it would just end in heart ache.

Blaine: I would have said yes.

Brittany: I would suffered it all just for the tiny chance to be standing up here, marrying you."

In the end all of four said some really wise words: "I'm a work in progress," and the I do's finally came. After waiting for so many years the two most complicated and beautiful couples finally reunited for good, leading to one of the most tender moments in Glee's history. Even though this series has had its ups and downs, Glee is saying goodbye by stepping into the sun, just like Klaine and Brittana.