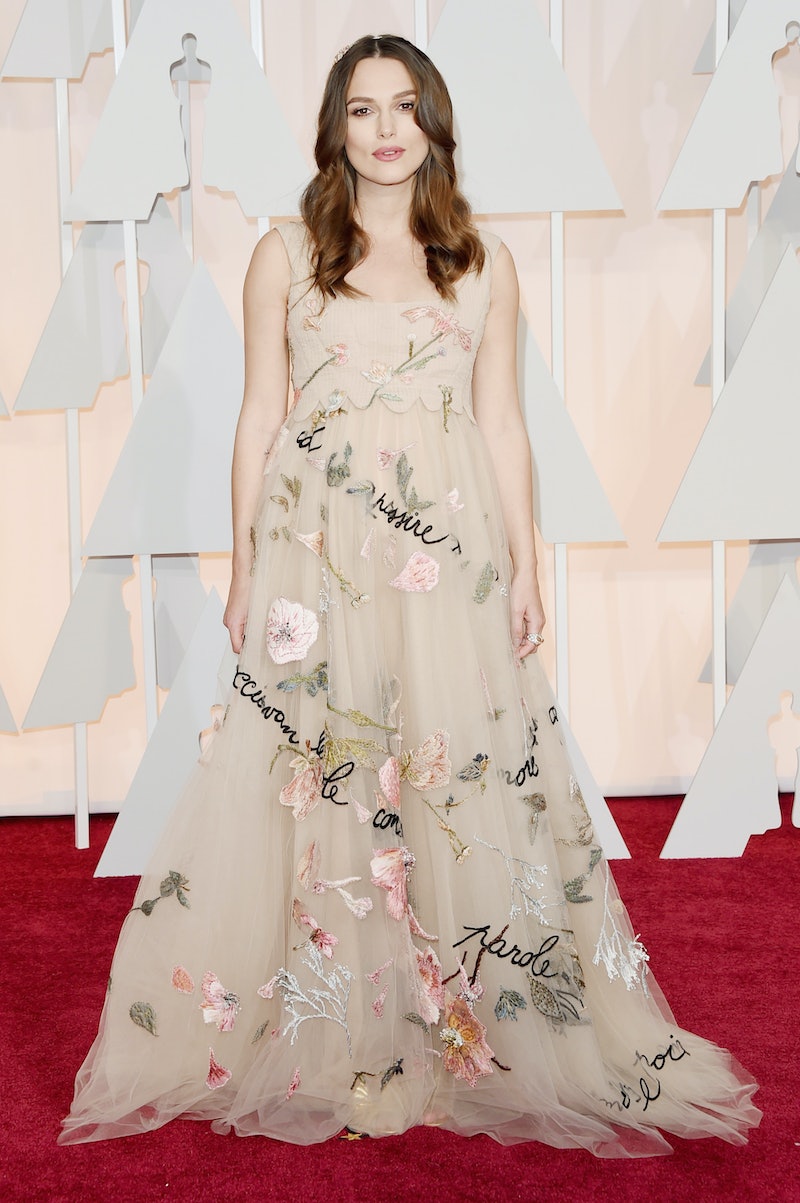 I may be speaking for myself here, but Keira Knightley's Chanel butterfly dress from the 2015 Golden Globes scarred me. Here I was, expecting this triumphant fashion moment from Knightley (new baby bump and all) and then out she came in her "this took 344,000 hours to make" butterfly-covered doily dress. I shouted "WHY?!" at the TV screen a couple times, wrote an article questioning the entire thing (as fashion writers do) and moved on with hopes that Knightley would bring her A game to the Oscars red carpet. Knightley is nominated for best supporting actress for her role in The Imitation Game for Academy Awards, and a front-runner for the win. While some said that Knightley redeemed herself at the Critics Choice Awards while wearing Delpozo, I think I was still a little hurt from the Golden Globes dress. I knew she could do better. So when Knightley showed up on the 2015 Oscars red carpet wearing Valentino, I was relieved to see it wasn't another butterfly incident, even if it wasn't completely perfect.

So, yes, Knightley is VERY into embellishments this year. There may still be flowers on this gown, but hey—there's no butterflies. And that's really all I care about. It's ethereal and flowy (noticing a trend for Knightley here?) and completely and totally feminine. Does it compare to some of Knightley's looks of past years? Absolutely not, but she's redeemed herself from the Golden Globes gown, I think.

Just in case you happened to forget just how traumatizing the butterfly gown was, let's go back to the 2015 Golden Globes, shall we?

Sigh. I still have a hard time believing that happened. I really do.

But, yes, things did get a little bit better at the Critics Choice awards when she wore Delpozo. It was ethereal and pretty, but I thought the fit was a little bit...boring. An empire waist and flowy gown during pregnancy. How exciting.

Do none of us remember Knightley's golden days? Her breathtaking Oscar moments of the past? I knew she could do better.

Remember this Vera Wang gown from 2006? It's not my favorite dress of all time, but it's certainly fun...which is something I can't necessarily say about Knightley's red carpet picks lately.

You can see why Knightley's Valentino Oscar gown may be a little bland if you're comparing it to past gowns, but it's hard to say that the dress isn't pretty. It's beautiful—a little magical, even. More importantly, though? Knightley looks totally comfortable and happy in the gown.