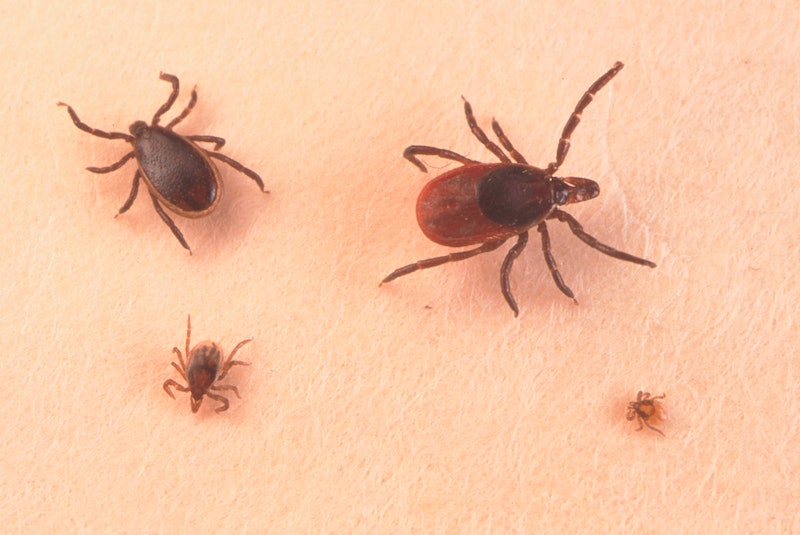 Ticks are nasty little insects. I mean, I'm sure they're great if you get to know them, but as they relate to human beings they're quite dangerous pests, being one of the primary carriers of Lyme Disease. And now, the Centers for Disease Control (CDC) are saying those tick bites might be even a little riskier than previously thought. On Friday, the CDC announced they've identified a new tick-borne virus, and it's demonstrated effects seem pretty serious — it was implicated in the death of a Kansas man in 2014.

It's been named the Bourbon virus, named for Bourbon County, Kansas where the sole recorded incident took place. According to the CDC's report, a 50-year-old man suffered multiple tick bites, and fell ill about three days later. The list of the man's symptoms sound awful, to say the least: "nausea, weakness, and diarrhea" on the first day of his symptoms, and "fever, anorexia, chills, headache, myalgia, and arthralgia" on the second (myalgia and arthralgia are muscle and joint pain, respectively). He sought medical care the day after that, but his condition kept deteriorating until his death from a heart attack, just 11 days removed from his first symptoms.

Word of the Bourbon virus' existence first broke back in late December, but the official release of the CDC's report makes it cause to take notice. As Dr. Dana Hawkinson of the University of Kansas told The New York Times, this is the first time the Bourbon virus has been definitively identified, but that doesn't mean it's the first time someone's had it.

I think we have to assume this has been around for some time, and we haven’t been able to diagnose it. We suspect there have been milder cases and people have recovered from them, but we don’t have a lot of information.

As always, it's important to keep a level perspective on these kinds of stories. Most importantly, there's no reason to fret about what's still a profoundly remote threat at this point. Basically, don't get worried needlessly.

But it's also a hugely ideal time to brush up on your tick preparedness! Whether you're worried about this newfound Bourbon virus, or one of the other dismal symptoms of tick-borne illness, there are some casual steps you can take to reduce your risk of infection when you're out in nature, courtesy of the CDC's website. Here are some of the biggest ones they suggest, assuming you'd rather not use an anti-tick bug spray.

All in all, while the news is a little spooky, it doesn't really demand any change in your everyday behavior — if you're going hiking, try to stick to the trails, and if you head through any forested areas, tall brush or bushes, keep your body well-covered and check yourself thoroughly for ticks when you're done.