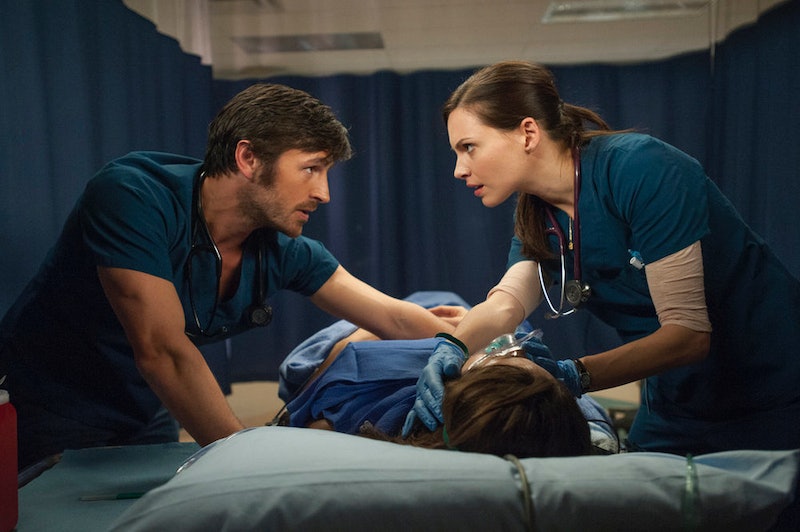 Do you feel an inexplicable desire to support NBC's flailing original shows, and maybe you're out of old favorites now the Parenthood and Parks and Recreation are both finished or in the home stretch? Well, there's nothing to worry about, because I have your new show: The Night Shift Season 2, which is on its way back to NBC on Monday nights... right after The Voice, so you can sneakily turn on the TV 15-30 minutes early to catch a few sob stories and Adam Levine/Blake Shelton jokes. But the Season 2 premiere is coming up fast — it's on Feb 23. So cut some corners, and read this Season 1 The Night Shift recap, so you don't have to shotgun all the episodes.

It should be noted, however, that there were only eight episodes, so you can always go back and catch up — though there's remarkably little to spoil. And let's be honest: the first season got some terrible reviews. It's a medical drama, and medical dramas tend to have very recognizable tropes. It's just nice to have a little cheat sheet to show who's who.

It's pretty straightforward: take everything that drove the medical drama on ER back in the day and dial it up by making it the middle of the night and much gorier. Then add the expected amount of doctors who look like models, doctor on doctor flirtation, a highly dramatic and tortured past for every cast member so they can deliver whispery monologues, and maybe the very worst fake American accent on television, and yes, I am including Charlie Hunnam on Sons of Anarchy.

The setting is San Antonio, which informs just about nothing other than the fact that they sometimes say they're in San Antonio. Eoin Macken, an absolutely lovely actor who can't hide the fact that he is from Ireland, plays the lead, maverick emergency room leader and former Army man who slips into a brogue every time he has to deliver a passionate speech, which is roughly every time he opens his mouth. He also has a gambling problem because he is dark.

In the show's best move, TC is already involved with hot doctor Landry, already over his ex Jordan, and already not getting along with boring admin Ragosa. Prepackaged conflicts save a lotta time.

The next few episodes are all about the gross medical procedures, like pulling a guy's hand out of a pig's stomach. This is the main reason to keep watching, because most of the interpersonal drama gets pretty boring here. Will TC like Jordan because of their old relationship? Is Landry jealous? Yawn.

The most interesting aspect of the show is that so many of the cast is veterans or still active duty military. So we get to see Drew's experiences in the Army Reserves. And Ragosa takes ecstasy. By mistake. ...Wacky.

The Plot Gets Even More Thick

TC and Jordan start to rekindle their relationship with a kiss. Blah blah, that continues with many significant looks exchanged. But the real plot gets kicked up to infinity: helicoptering into plane crash sites! The DEA getting involved at the hospital! A shooter shows up at the hospital and TC disarms him! We're talking Grey's Anatomy at its absolute soapiest here, and it hasn't even been 10 episodes yet. Lovable Topher gets shot in the stomach!

After saving lovable Topher and letting his shooter die, even though he could have been saved, we leave every character questioning their decisions. TC has some American Sniper-esque flashbacks that reveal why he's so dark — he could have prevented his brother's death, but hesitated in shooting a child. Jordan is the lucky lady who gets to unpack this emotional baggage. Oh, and hardass Ragosa has a brain tumor. Lots of fun for Season 2! But really, yes, I do want to know what happens in Season 2 now. Will TC actually do the mature thing and try to repair his mental health? Will Ragosa get superpowers? Will Landry start Crucifictorious?