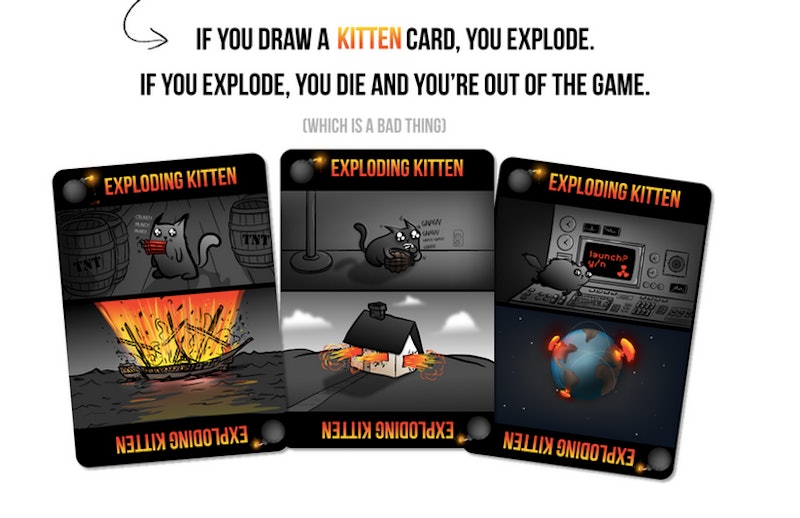 The Internet is a strange place, and on Kickstarter, it gets a bit stranger. In what other environment could a game entitled Exploding Kittens become the highest funded game project in the crowdfunding platform's history? After an impressive start, quickly becoming Kickstarter's most backed project of all time (with well over 100,000 supporters just days into its campaign), Exploding Kittens has proved that its finishing game is just as strong, if not stronger, than its initial appeal. In total, the game has raised a stunning $8.78 million. How many kittens will be made to explode with that kind of money I simply do not want to know.

The game, which is described by creators as a "kitty-powered version of Russian Roulette," had at first only the modest goal of raising $10,000. But the bar was clearly set too low, as Kickstarter supporters rushed to donate to this worthy cause in droves, allowing Exploding Kittens to reach its first target in just 20 minutes. 30 days later, the game has seen its goal surpassed nearly 900 times over, with 219,382 people donating to the cause. For context, the Reading Rainbow campaign — you know, the one that wanted to ensure that children were equipped with the crucial life skill of literacy — had 100,000 fewer backers. Who says we have a priorities problem in this country?

With its nearly $9 million closing tally, Exploding Kittens has replaced the previous top-earner in the games category of Kickstarter, the Ouya game console, which raised just under $8.6 million during its time on the platform. The game has also become the third most funded project overall from Kickstarter, only to be outdone by the Pebble Smartwatch and the Coolest Cooler. Come on — you wouldn't rather see felines combust than keep your drinks cold?

Though the game was created by Elan Lee and Shane Small, two Xbox game designers, Exploding Kittens involves no consoles or electronics, and is rather the brainchild of Matthew Inman, better known as the cartoonist behind The Oatmeal. On their Kickstarter page, the team described the origins of the game as follows:

Exploding Kittens started when Shane Small proposed a game to Elan Lee where a joker was inserted into a deck of cards and they took turns picking cards until the joker came up. It was called “Bomb Squad” and it wasn’t any fun at all.

Over the next few weeks, two important things happened: First, after neglecting work, family, and a social life, Shane and Elan developed a rule-set that started working and brought the game to life. Second, Matt Inman saw the game, thought it was super fun, and asked to join the team. (btw, if Matthew Inman ever asks you if he can join your team, the answer is “HELL YES”.)

We changed the name to "Exploding Kittens" and our little team was born.

Now that the dust has settled, what began as a game that "wasn't any fun at all" has been transformed into a multimillion dollar idea, with eager customers awaiting the arrival of the box set of cards to live out their somewhat deranged fantasies of killing cats.

As Lee, Small and Inman explained, these kittens do not explode as a result of any human activity, but rather as a byproduct of their own carelessness. The creators write on their page, "We struggled with this a lot. We love the name Exploding Kittens, but we don't want to hurt kittens. We also don't want the kittens to be hurt by anyone else. Eventually we decided to explore the concept of the kittens blowing themselves up." This happens, of course, "by doing the things that kittens do, like running across keyboards or chewing on things they shouldn't be chewing on."

For the record, despite the fact that my own kitten has run across her fair share of keyboards and chewed more than enough cords, she has still not spontaneously combusted. Here's hoping that doesn't change.

While the project has ended, you may still be able to finagle your way into a deck of Exploding Kittens cards if you're willing to dole out $20 for the standard set, or $35 for the NSFW set (don't ask). Given the game's outlandish popularity, it seems that you may see these cards in stores sometime soon. The success of the campaign seemed to shock even the creators, but in order to celebrate their goldmine of a game, the three men decided to give back to their communities, at one point "hosting pizza parties across the country to honor the super heroes in our lives who care for hurt and homeless animals."

On Feb. 19, when the campaign officially ended, the creators sent out this final update:

On the very first day of this campaign, we hit our funding goal. That was a big deal.

But after that, the campaign stopped being about money, and started being about a community. We decided that everything we did from that point on would be to celebrate you guys, and help you celebrate each other.

In the last 30 days, you’ve broken a lot of records, but we wanted to highlight our favorite one: you made this the most fun Kickstarter to run of all time.

So while the game was initially about people who were "into card games or laser beams or weaponized enchiladas," and wanted to live in "a world full of weaponized pork missiles," the cult-like following behind Exploding Kittens has far exceeded everyone's expectations. So get your hands on a deck, and see what all the fuss is about.