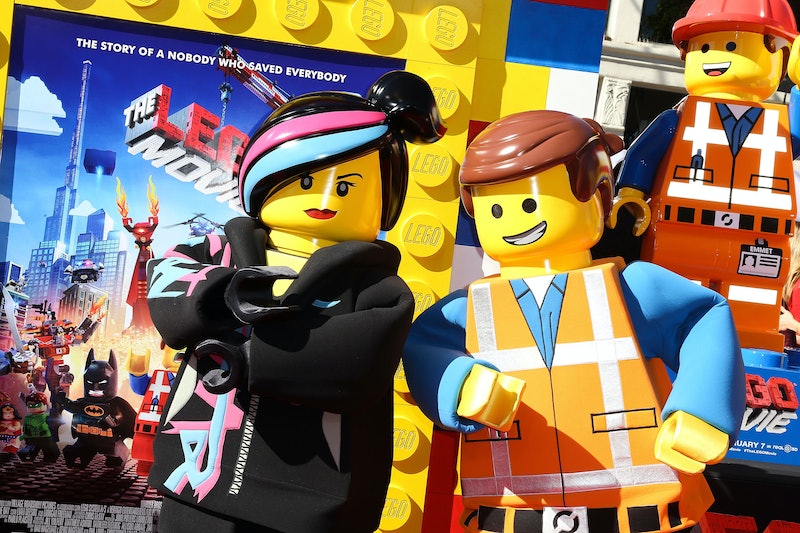 With all this talk of lack of diversity and the slightly obvious winner predictions, the 2015 Oscar Awards haven't really garnered the greatest press in the world. But with a wildly entertaining host like Neil Patrick Harris and one of the best, most memorable Oscar musical performances in a long time, things might be moving in the Oscars' favor. The hilarious trio of The Lonely Island alongside Tegan and Sara took on The Lego Movie's song "Everything Is Awesome" at the Oscars and it was exactly as the song's title describes: Awesome.

The performance began with a Lego church choir doing a choral arrangement of the chorus of the song. Quickly, the always hilarious Lonely Island guys came out rapping with blue '70s style suits with capes, rapping hilarious lines like "I feel more awesome than an awesome possum/ Dip my body in chocolate frostin’/ Three years later, wash off the frostin'."

Backup dancers in construction worker outfits, fake cowboys and people with devo hats, all reminiscent of the movie, came out doing insane jumping-jack dances all over the stage.

But that's not all! Tegan and Sara came out with the famous chorus of "Everything is Awesome," and Will Arnett dressed as Batman — his character from the movie (which was absolutely perfect for him by the way) — came out and performed a cameo bit in true Batman/Dark Knight emo fashion with Questlove, who then took over on the drums.

The dancers then came out into the audiences and handed life-size Lego Oscars to the biggest stars of the night including Steve Carell, Channing Tatum — and of course Oprah, because why wouldn't you want Oprah to be waving around a Lego Oscar?! That's basically the ultimate pitch for the film and the song. (Also, how can I get my hands on one of those?)

The entire performance went extremely quickly and ended much too soon, but it's over-the-top nature, insane, drug-trippy few minutes perfectly showed the true joy and entire feel of The Lego Movie overall, and hopefully it made the Academy voters feel bad for not nominating the film for Best Animated Feature! I'm still bitter about it, and thanks to this performance I'm most certainly not ashamed to admit it.