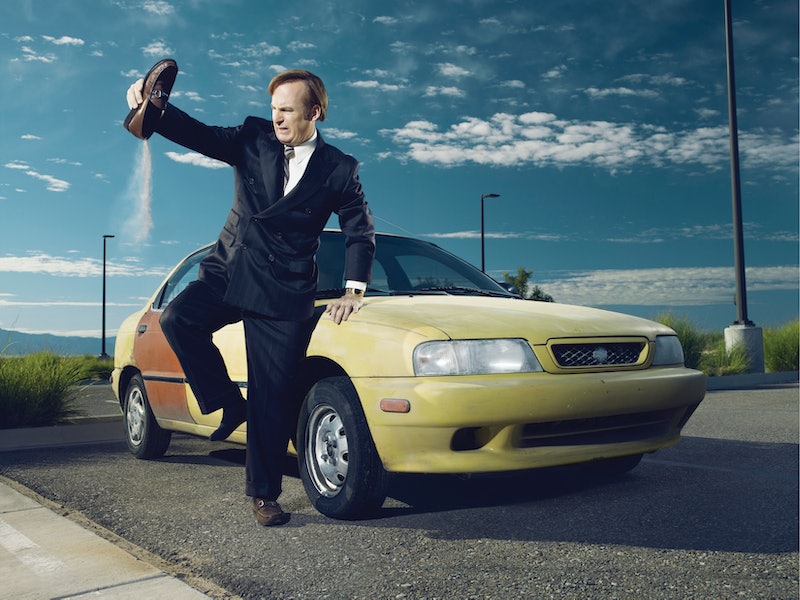 For those of us still going through a Breaking Bad withdrawal phase, at least we didn't have to wait too long before we returned to Albuquerque, New Mexico. Though we don't have Walter White and Jesse back, we do have someone just as beloved in Saul Goodman (or, as he's known nowadays, Jimmy McGill). Better Call Saul is set in the same Breaking Bad universe (obviously), so there's a bit of a side game while watching the show: catching the Breaking Bad Easter eggs throughout Better Call Saul. After all, creator and showrunner Vince Gilligan knows exactly what we like. And we like a good call back... or seven.

We're just three episodes into Better Call Saul, but already there are a handful of lookbacks to get us all nostalgic for Heisenberg's Albuquerque. Though I doubt you would have made it to Better Call Saul without learning this firsthand from Breaking Bad, it's worth mentioning that Gilligan's thing is making references. Watch three episodes of Breaking Bad and it's beyond clear that he loves drawn out references, motifs, allusions, color symbolism, and royally messing with our minds. With Saul he wasted no time getting on his game.

What's great about Gilligan's references to our first love aren't just there to get us to ooh and aww; they're part of the plot. Take for example, the huge OMG moment when Breaking Bad villain Tuco showed up during the last seconds of the pilot episode — I doubt any of us was expecting Tuco "Tigh-tigh-tight" Salamanca to show up at all and definitely not this soon. We'd been warned about the return of Mike Ehrmantraut thanks to casting news and promo images, even though all he's done so far is sit in his little parking lot attendant booth and screw around with Jimmy. But these are the easy ones.

Throughout Better Call Saul are peppered references that don't exactly announce themselves. Here's what you may have missed so far:

Jimmy currently lives on 160 Juan Tabo NE in Albuquerque. This address might not mean much of anything, but someone else lives a little bit further down Jimmy's street: Gale Boetticher, the chemist who Gus hired to replace Walt and Jesse. Gale — in the future — lived at 6353 Juan Tabo. Hope this means these two will cross paths.

Jimmy's office is set up in the back of a nail salon. It brings back memories of the A1 Car Wars from Breaking Bad, but that's not the real connection here. Later on, Saul will try to get Walter and Skylar to use this nail salon as their money laundering location. Guess he's got a soft spot for it, even though his office is next to the boiler.

During the pilot, we get a nice shot of a white Cadillac DeVille, which will one day be Saul's on car, with the license plate, LWYRUP. Right now, the closest he's getting to it, though, is parking his two-toned Suzuki Esteem next to it. Soon, Jimmy. Soon.

OK so this isn't technically an Easter egg, but it is something that helps bring the Breaking Bad and Better Call Saul realities into one plane: You can call Jimmy for legal advice at 505-503-4455, and you can call Nacho at 505-242-6087. The best part? These are both New Mexico numbers.

More like this
'This Is Us' Included A Heartbreaking Easter Egg About Jack's Death
By Grace Wehniainen
'Broadchurch' and 'I Hate Suzie' Casts Join Forces For Gritty BBC Drama
By Sabah Hussain
What’s New On Netflix: A Victoria Justice Rom-Com & The Return Of David Letterman
By Arya Roshanian
Will Vampire In The Garden Get A Season 2? What To Know
By Kadin Burnett
Get Even More From Bustle — Sign Up For The Newsletter