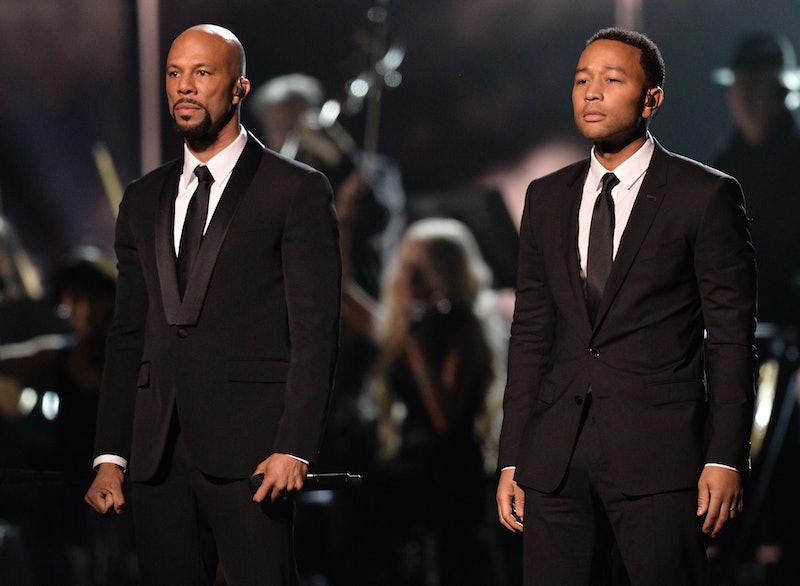 John Legend and Common's performance of their Oscar-nominated song "Glory" at the 87th Annual Academy Awards on Sunday evening was their most powerful yet. The two gave serious, electric performance of the song that brought the audience to tears as they rose in a standing ovation. Legend opened the song alone on the piano, but the stage lit up brightly revealing a backdrop of Edmund Pettus Bridge — the iconic bridge over which Dr. Martin Luther King, Jr. led his march from Selma to Montgomery. Joined by an enormous chorus, Legend and Common's performance was fierce, powerful and rife with emotion.

"Glory" was a favorite for the Oscar win, and its prominence was a reminder that the actors and director Ava DuVernay were blatantly snubbed for their tremendous work on the film. Legend and Common's performance was beautiful and soulful; to see Common rapping his powerful verses about those who marched fifty years ago for equality and those who march for Ferguson now against the real backdrop of Selma was haunting.

Both Legend and Common couldn't — and didn't try to — hold in their emotion; as Legend joined Common on stage for the final chorus of the song, he had tears in his eyes. They were flanked by a huge chorus of African-American singers, who slowly and solemnly crossed the bridge; they had a sound as resonant and powerful as the sheer image of their numbers. It was a beautiful visual echo of the song's message: their is strength in solidarity in the face of adversity.

After the final notes and the final ringing "When the war is won, we'll cry glory," the audience was compelled to their feet; David Oyelowo, who portrayed Dr. King in Selma was openly sobbing; Oprah, too, was in tears, as was Chris Pine. John Legend and Common gave a performance that resonated far beyond the Academy stage, and you could feel that in the audience; as they stood together on stage with their enormous chorus, Legend and Common channeled through "Glory" the spirit of the continuing fight for civil rights.

More like this
Tom Cruise Gives His Honest Review Of Lady Gaga’s New Song For 'Top Gun: Maverick'
By Hugh McIntyre
Remember When Benedict Cumberbatch Announced His Engagement In A Newspaper Ad?
By Hugh McIntyre
Watch The Dramatic First Trailer For Netflix's Jennifer Lopez Documentary
By Alyssa Lapid
Lisa Marie Presley Reviewed Baz Luhrmann’s ‘Elvis’ Movie On Twitter
By Grace Wehniainen
Get Even More From Bustle — Sign Up For The Newsletter