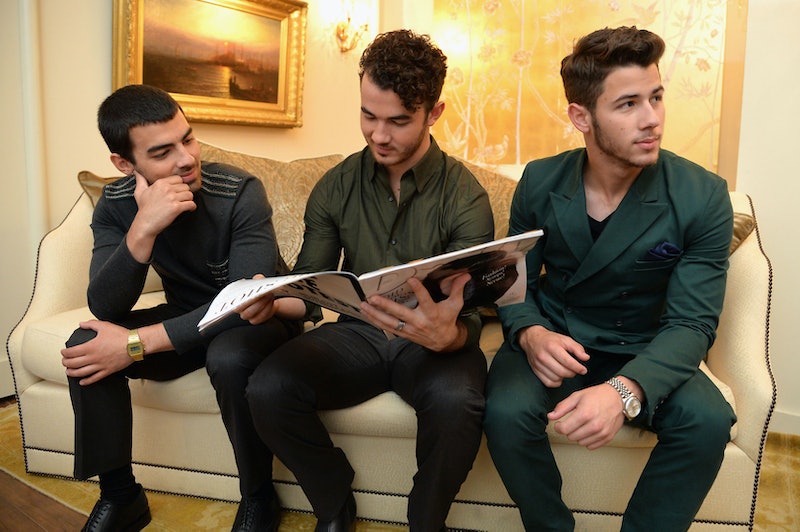 So, the Jonas Brothers are in a fight. Which is not really the brotherly love way, you guys. Still, this alleged "deep rift" (their words, not mine) has caused a chasm so severe it's caused the not-a-boy-not-yet-a-man banders to cancel their 19-city tour. GASP! No really. In an interview with People, the band's spokesperson, Jesse Derris, explained it as such. "There is a deep rift within the band. There was a big a disagreement over their music direction."

OBVIOUSLY this means it's time to speculate and play the "Oh, c'mon, we know what these early twentysomething, well-coiffed tween cooter magnets are really fighting over" game. It's simple, really: they all want something different!

I mean, that's also just the nature of fighting. But also, look at these three: There are so many easy explanations for a ~deep rift~ when it comes to brotherly and musical differences. Like, obviously Joe and Nick want to go solo, crushing the dreams of Other Jonas (I think his name is Kevin?), who just wants to carry his Chris Kirkpatrick torch all the way to the end.

And with those morality-engorging purity rings pushed to the wayside, surely it was only a matter of time before it came to this. Self-awareness is a bitch worth cutting down to size, I always say. Alas, it seems as though the sweet, illicit lure of mega-dollars and more sexually adventurous groupies — a desire inherent in Joe's MO these days (ever since that girl cupped his balls behind Club 33 in Disneyland) — has won over another cherubic, chaste, and utterly whitewashed (not that it was hard) Disney Idol.

"We're not safe," he cries, desperate to be heard above the whirring, chomping pupeteers behind the scenes (oh, sorry, they prefer "$upport system" I think). "Yeah!" Nick defiantly squeals. "We're tough and gruff and have seen some stuff!" "Yeah, like Mickey Mouse outside of his costume!" Kevin chimed in, desperate to feel apart of his younger siblings' rocket into superstardom once more. Like in the old days. You know?

And somewhere high above, he sits, stirring the cauldron as it bubbles over. "A tiff! How cute, how original," he muses. He lazily tosses a few more logs on the flame, dashing the concoction with a bottle labeled "bitters." He leans back, falling comfortably into his cloud made of money and marijuana smoke. Justin Timberlake laughs and laughs, nodding his head, knowing all too well how this story will unfold. His eyes close, and a bemused smile creeps across his lips. "It has begun. Again."