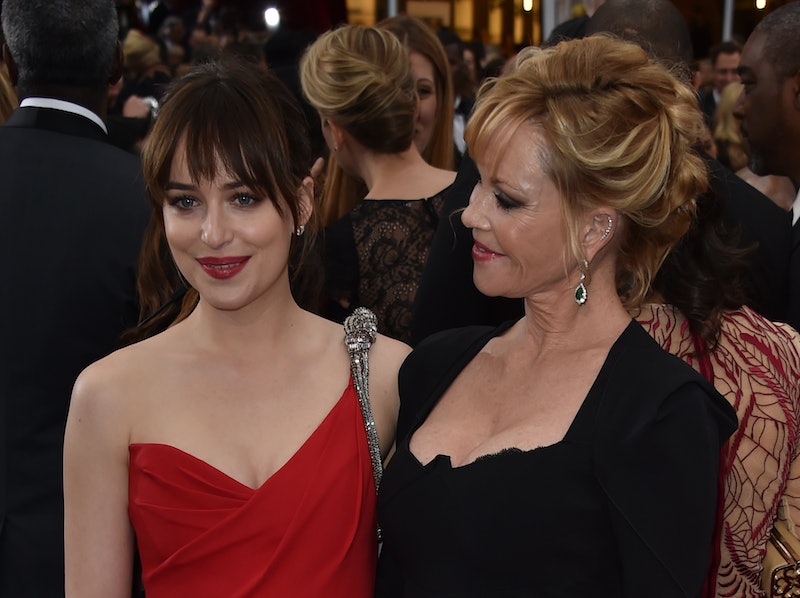 The sexy film Fifty Shades of Grey just had a huge weekend — dominating (couldn't help myself) the box office by earning $23.2 million — solidifying the movie based on the novel by E.L. James as a smash hit and turning actress Dakota Johnson into a bona fide star. The 25-year-old actress bares all in the very risque film, but she rocked the Oscars red carpet on Sunday night in a gorgeous red St. Laurent dress and Forever Diamonds... and Dakota Johnson did it with her mom Melanie Griffith on her arm.

That's right. Johnson brought her very famous in her own right — and proud! — momma. "My mom's here with me, she's my date," Johnson told Ryan Seacrest on E! Griffith and Johnson, who is her daughter from her marriage to actor Don Johnson, walked the red carpet together with Griffith gushing with pride regarding her daughter's recent success. Aww!

Johnson actually just split with boyfriend Matthew Hitt recently, but it's nice to see her momma is there to be there for her big moment. After all, she's been there for her parents. ABC showed a clip of the 2000 Oscars, when Johnson walked the red carpet with Griffith wearing an adorable Dottie Doolittle dress.

Fifteen years later, Johnson's come a long way. She's got a hit movie that isn't quite suitable for her parents to see ("They haven't seen it yet," she told Seacrest), she's presenting an Academy Award, and she even got to keep a prop or two from the set of Fifty Shades.

"I kept a flogger," she told Seacrest. "Wait, can I say that on television?"

You can. But will it make a cameo during the Oscars ceremony itself? We'll have to wait and see.