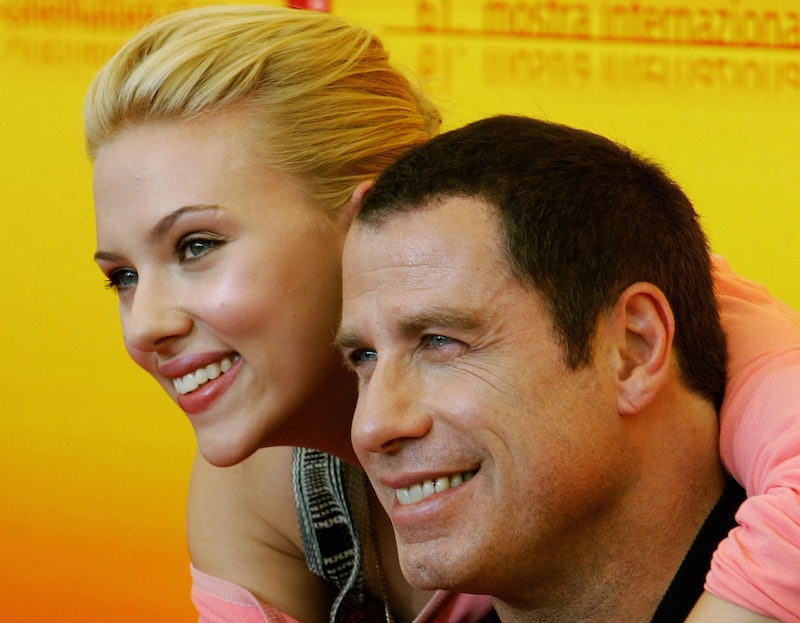 It's a certainty that The Academy Awards will bring with them a bevy of odd, awesome, and straight up WTF moments. There's always gorgeous dresses and dapper tuxes, and an equal number of wacky getups that look like they could have come out of the Best Picture nominees themselves. This year, Scarlett Johansson and John Travolta contributed to the latter category with a kooky picture that some reporter, who was probably giggling behind their camera, snapped.

So, what exactly is going on in this photo? Why is Travolta's hand placed so awkwardly around her waist, and why is it remaining for such an extended moment? At least, long enough to bestow upon her blushed cheek a lingering kiss. Perhaps he's trying to make up for his Idina Menzel mispronunciation by simply giving every female in the room a nice warm embrace. Scarlett Johansson herself looks utterly confused by the hug. Is she winking on purpose, or is she simply enduring the embrace? Here's a few guesses, in a little game called... CAPTION THIS!

I'm Not Climbing In The Back Of Your Car, Danny Zuko

Your Stomach Is So Tiny & Soft, I'm Never Letting Go

Did You Get My Email About Being Your Black Widow Body Double? *Wink*

Oh, And That Scientology Newsletter? I'm Featured On The Front Page — They Gave Me a Byline & Everything