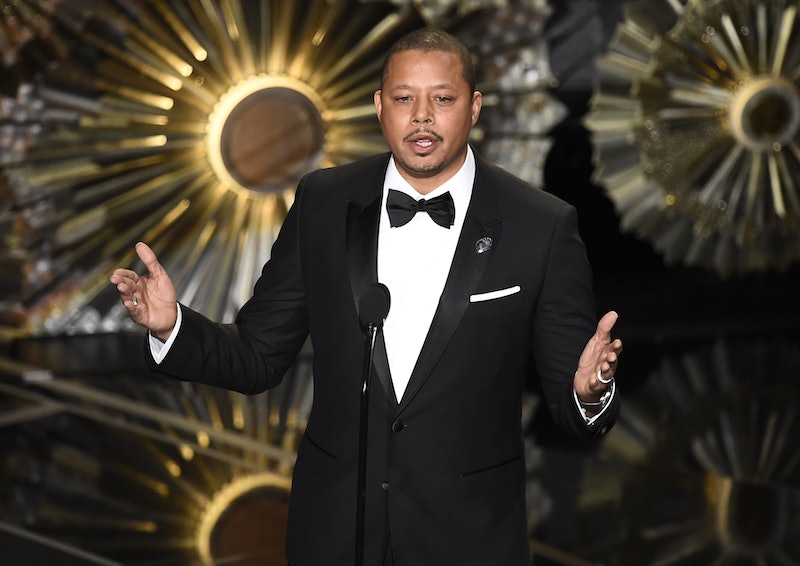 Who would have thought that Terrence Howard would be so moved and affected by Alan Turing's story in The Imitation Game ? Not that Howard doesn't have the emotion to really feel something for an obviously powerful and moving story about a man who helped win World War II and yet was punished for his sexuality. But while Howard presented video clips for Whiplash, The Imitation Game and Selma, Howard had to take a pause before continuing with his pre-written speech about the nominees right before he spoke about the tragic tale of such an incredibly important man.

"Our next film, our next film is amazing. I'm blown-away right now myself. Our next nominee for Best Picture reveals how the visionary father of modern computing Alan Turing helps defeat the Nazis only to have his own greatness stripped away from him because of his sexual orientation. The Imitation Game is as potent as uncompromising as Turing himself."

While this show of emotion was really quite wonderful to see (as long as it was actual emotion and not a teleprompter issue, which is a possibility), I did find it interesting that in Howard's role in the extremely popular new Fox show Empire finds the actor in a part that requires him to play someone who not only doesn't understand homosexuality, but also doesn't accept his son's homosexuality.

Obviously Howard does not share his character's ideals, but it's still comforting to see.

And Turing's story wasn't the only thing that brought forth so much emotion from the Howard. He was also tasked with announcing Selma as a Best Picture nominee and his speech here was equally powerful and later paved the way to an incredible performance of Selma's Best Original Song winner "Glory."

"The spirit of Dr. Martin Luther King Jr. is given voice in our last nominated film. Here we meet the men and women who took a firm stand against discrimination as they forged a path we are still building upon today. Selma honors the vision and the life of it's incomparable subject."

It's beautiful to see such extraordinary and true sentiment from actors over real issues. I hope we can witness this more often from Hollywood. Watch Howard's full speech below.

More like this
Remember When Benedict Cumberbatch Announced His Engagement In A Newspaper Ad?
By Hugh McIntyre
Tom Cruise Gives His Honest Review Of Lady Gaga’s New Song For 'Top Gun: Maverick'
By Hugh McIntyre
Sandra Bullock, Girlboss Extraordinaire
By Matt Harkins & Viviana Olen
Twitter Got *Very* Emotional Over 'The Split’s “Perfect” Finale
By Sam Ramsden
Get Even More From Bustle — Sign Up For The Newsletter