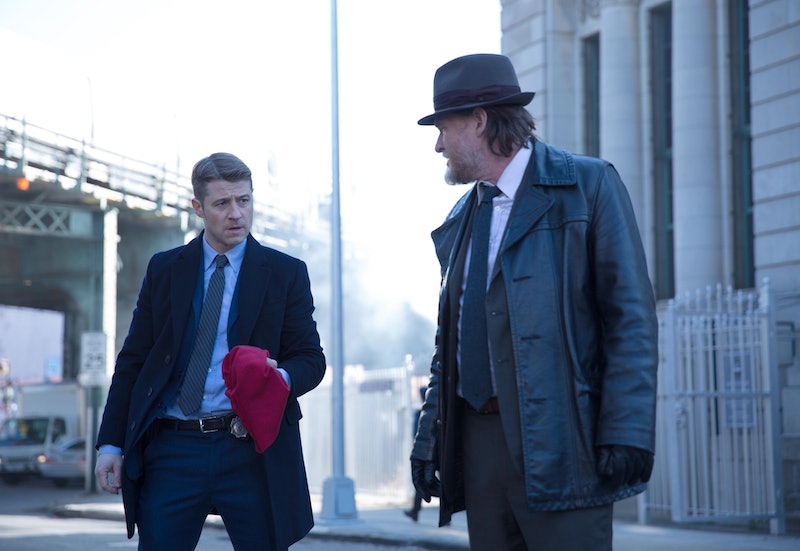 After teasing the Joker for the first half of its season, it seems Gotham has truly decided to introduce the iconic character into its world. Well, the teenaged version of him anyway. I am still not sold on Jerome and his knock off impression of Heath Ledger really being the Joker, but that doesn't mean Gotham will stop introducing new plot threads that relate to the villain's storyline in the comics. In the Feb. 23 episode of Gotham, " Red Hood," we'll be introduced to the notorious Red Hood Gang. This new criminal element adds an interesting texture to Gotham. Sure, we have already seen theatrical villains. Frankly, the whole show is a theatrical and campy mess. But the Red Hood Gang introduces the notion of masks and secret identities in a much larger way, though I still wouldn't expect Gotham to stick to the comic book version.

Red Hood Gang is a group of criminals who rotate men under the guise of their leader to protect his true identity if a job goes wrong. The gang was created by none other than Alan Moore in his seminal graphic novel The Killing Joke, which provides one of the more popular versions of the Joker's backstory. I am not a fan of The Killing Joke, but I can't deny its importance. One of the criminals who posed as the Red Hood Gang's leader? None other than the man who would become the Joker. In The Killing Joke, the future Joker meets Batman for the first time while posing as the Red Hood Gang leader and is knocked into a vat of chemicals. Coupled with some very ugly personal issues, he goes bonkers and the rest is history. Watch a preview of the Red Hood Gang's Gotham introduction below.

No one else of importance is in the Red Hood Gang in the comics. Throughout their history, the Gang is made up of criminals who the story never really reveals or builds on. This means Gotham has a lot of room for experimentation. But we may also get a lot of over-explanation and a complete lack of mystery. One thing is certain: Gotham is creating a very different version of the Red Hood Gang.

In an interview with Comic Book Resources, Gotham showrunner Bruno Heller explained the underpinnings of the new Red Hood storyline:

Instead of a fully operational Red Hood Gang, we'll meet a criminal with a flair for the dramatic who takes to wearing a red hood and grandstanding during his bank robberies. This new criminal isn't even in it for the money, since he gives it away, becoming a twisted version of Robin Hood for the city. Will he form a more extensive gang that wears red hoods and shares his flair for theatrical brutality? Is he somehow linked to the future Joker? There are a lot of questions up in the air for Gotham to tackle.

More like this
What Does Doctor Strange’s Third Eye Mean?
By Arya Roshanian
Grey's Anatomy Fans Refuse To Accept Kaimelia's Shocking Relationship Update
By Brad Witter
Oops! The 'Stranger Things' Monopoly Game Has Spoilers For Season 4
By Alyssa Lapid
20 Photos From The 'Stranger Things' Season 4 Premiere To Make You Feel Old
By Alyssa Lapid
Get Even More From Bustle — Sign Up For The Newsletter