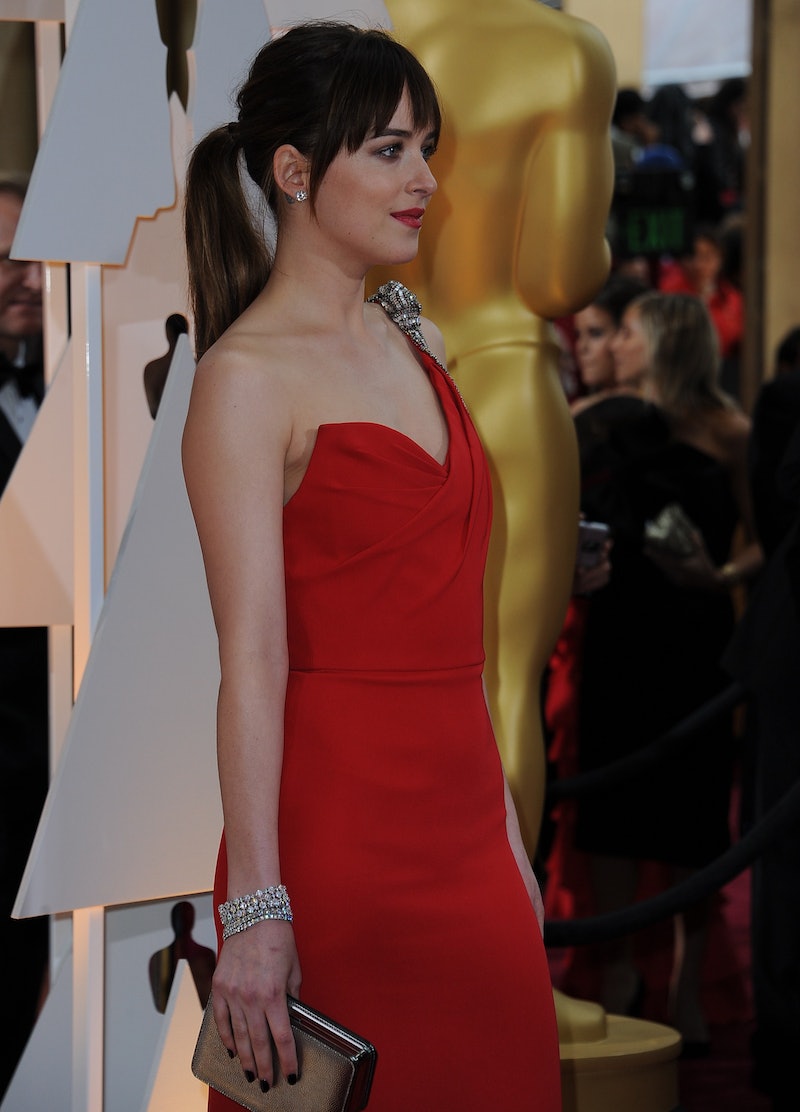 The ponytail had a moment — several of them, actually — at the 2015 Oscars. Most long-haired girls usually toss their hair into a ponytail for things like running errands, exercising, or to just generally get it out of their faces. The ponytail is more about utility than about being chic... save for last night. Between updos and ponytails, the 2015 Oscars hair trends were all about getting those strands up and away from your face. But the most impressive part? None of those red carpet ponies looked the same.

Like how amaze did Dakota Johnson look with her banged ponytail, which sat at the center of her skull? I'm sure Ana Steele fans are thinking of other uses for such an out-of-the-way style, but in this case it was most likely done to show off the sparkle on the actress' Saint Laurent gown.

On the other end of the ponytail spectrum, we have Leslie Mann's tousled 'do. I'm obsessing over the multi-texture look, and how the sleekness of the front balances out the teasing at the back. Plus, it's giving me hope for the rat's nest my scarves tend to cause in the wintertime. Maybe my staticky hair is actually... chic?!

From sleek to teased to everything in between, let's marvel at the ponytails from Sunday night, shall we?

Her porcelain skin was also a focus, thanks to her pony. That fringe is so lovely.

The dress was so big that no hairstyle could compete so J. Lo kept is as simple as she could, with ombre and waves.

Since Gaga wore custom Alaia and red boxing gloves, she also needed to keep the hair as low maintenance as possible and she did, relatively speaking, with her flipped and knotted pony.

Christina Aguilera hit the Vanity Fair afterparty with a high and tight, Genie-like pony. Since her dress had a high collar, she didn't want to cover it up with all that hair.

Judd Apatow's wife and funny lady Leslie Mann had a fun take on the pony, with a center part and big curls! It had vibrancy, that's for sure.

Preggers Molly Sims, who is due, like any minute, wore a high neck, sparkly, and jewel-toned gown, so going with a bouncy, messy pony with volume was a smart choice, since her hair didn't get in the way of the dress.

See?! Ponytails definitely don't have to be dull.