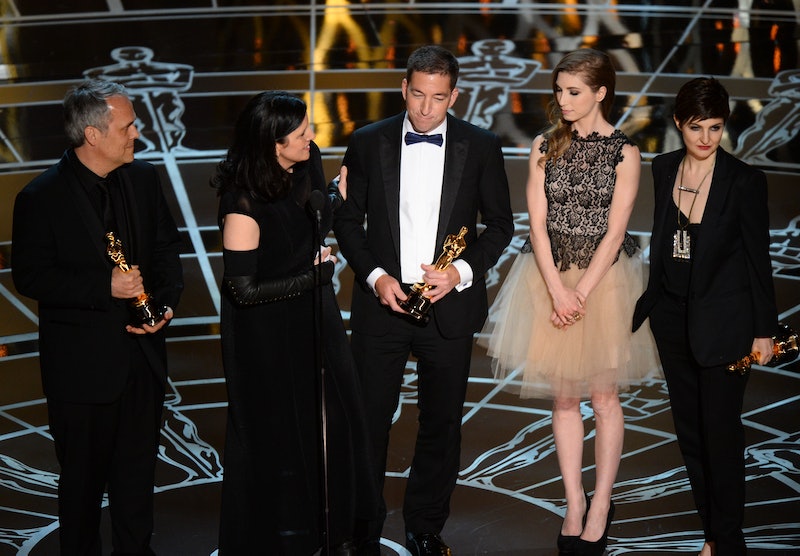 There were many deserving contenders at the 87th Academy Awards on Sunday night, but one documentary arguably stood apart from the rest. Citizenfour tells the true story of Edward Snowden and how he exposed the NSA's massive surveillance program to become arguably the most famous whistle-blower in history. The documentary's title refers to the code name that Snowden used when he first contacted the film's director, documentarian Laura Poitras. After taking home Best Documentary Feature on Sunday night, Citizen Four himself, Snowden, has spoken out about the Oscar win.

When Citizenfour was announced as the winner of the Academy Award for Best Documentary Feature, director Poitras walked up to the stage alongside the documentary's editor and producer, as well as journalist Glenn Greenwald — who also appears in the film — and Lindsay Mills, Snowden's girlfriend. Snowden, of course, could not be there to help accept the award, and his absence even prompted host Neil Patrick Harris to quip, "Edward Snowden could not be here tonight for some treason."

Snowden did, however, offer his congratulations from Russia. Snowden issued the following statement through the American Civil Liberties Union:

When Laura Poitras asked me if she could film our encounters, I was extremely reluctant. I’m grateful that I allowed her to persuade me. The result is a brave and brilliant film that deserves the honor and recognition it has received. My hope is that this award will encourage more people to see the film and be inspired by its message that ordinary citizens, working together, can change the world.

Indeed, what makes Citizenfour so unique is that it documents not how the world changed 100 or even 20 years ago, but how the world is continuing to change from a discovery made just two years ago. The ripples that Snowden created are still very much being felt, as the American public and politicians continue to grapple with the controversial ongoing program.

In January 2013, Snowden first contacted documentarian Poitras via an email in which he calls himself Citizen Four, a message that would become the impetus for the film. In late May 2013, Poitras, who has been placed on the Department of Homeland Security's watch list for her previous films, met with Snowden along with investigative reporter Greenwald and The Guardian's Ewen MacAskill.

During that meeting and over the course of several other meetings, Snowden would reveal classified information about the unknown reach of the NSA's surveillance program, which was then published by The Guardian and The Washington Post on June 6, 2013, blowing the lid off what is perhaps the biggest invasion of privacy scandal in U.S. history.

Aside from the subject matter, the film merited the Oscar in a few ways. The editing is sharp, lending what could have been a very dry documentary based on email exchanges and meetings in hotel rooms the distinct feel of a thriller. Beyond that, there was another very major factor in the documentary's victory.

Ahead of Sunday night's awards ceremony, The New York Times had predicted Citizenfour's victory, pointing out that it would be a way for the Academy to make a political statement without coming right out and supporting Snowden or criticizing the U.S. government. Under this logic, awarding anyone else would therefore come across as a statement of its own.

More like this
Remember When Benedict Cumberbatch Announced His Engagement In A Newspaper Ad?
By Hugh McIntyre
Tom Cruise Gives His Honest Review Of Lady Gaga’s New Song For 'Top Gun: Maverick'
By Hugh McIntyre
How To Fight For Reproductive Rights, Based On How Much Time You Have
By Courtney Young
President Zelensky Spoke Out On Ukraine's Chances Of Hosting Eurovision Next Year
By Sam Ramsden
Get Even More From Bustle — Sign Up For The Newsletter