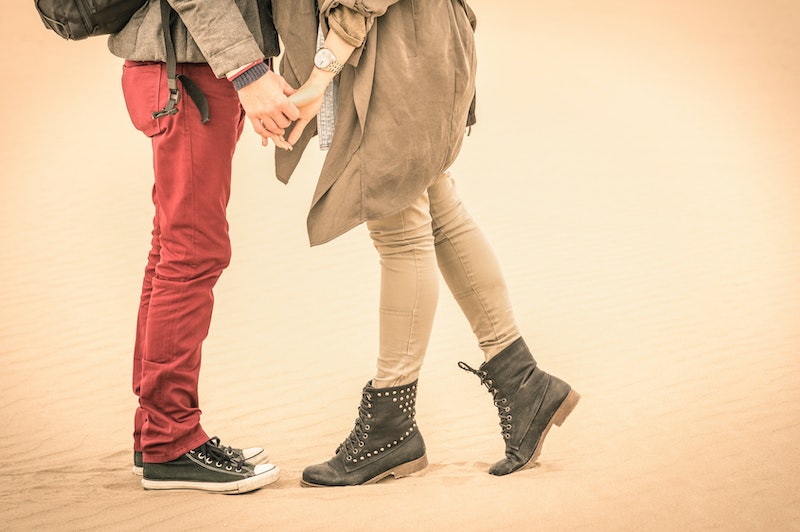 Going on first dates may not always be a lot of fun — but is watching someone else go on a first date any better? The Guardian thinks it might be, which is why they've started up a web series called “Watch Me Date.” Each week, The Guardian gives two different people pairs of Google Glass and sends them off on a date together in a video spin-off of the paper's popular "Blind Date" column. Then they cut the footage together with a few Real World-style interview sections, and, well… is this the quintessential picture of modern dating? Maybe.

It's possible that the videos that make up "Watch Me Date" aren't quite as “fly on the wall”-esque as they're intended to be; I suspect that both participants being not only aware of the cameras, but actually wearing them might result in a somewhat performative date (as opposed to the sort a candid camera-type show might catch). Also, I think The Guardian may be a little late to the party on this one. As of January 19, Google is no longer selling the version of Glass that, for all its hype, failed to take off last year. As Tech Times notes, “Google has invested too much in Glass to entirely abandon the project”; however, in its current iteration, it's far from the household fixture the company was clearly hoping it would become. Given that “Watch Me Date” relies on this demonstrably unpopular and now outdated piece of technology to work, I can't help but feel that the “novelty” of it isn't quite so… well, novel.

That said, though, the series is still pretty entertaining — and you can pick up a number of solid dating do's and don'ts from them. Here are a few I culled from the first episode featuring Flo, a 26 year old who works for a recipe kit company, and Andy, a 24-year-old stand up comic; scroll down to watch the whole episode, and head on over to "Watch Me Date's" YouTube channel for more.

Flo's first impression of Andy was largely colored by the grin on his face, which she said was “quite relaxing.” See? Smiling really does put people at ease.

2. DO: Keep your desperation in check.

Unfortunately, Andy came across in his interview portions as more than a little bit desperate. I totally get that solitude isn't quite so fun when it starts turning into loneliness… but desperation is one of the biggest turn-offs there is, and he was kind of dripping with it. He also seemed a little like he had a chip on his shoulder, remarking that he's often the “rebound” relationship for the people he's dated — or, as he put it, “So many times, I've been the person after the person.” Hint: If you're seeing that kind of pattern in your relationships, maybe it's time to start reevaluating your dating choices and making some changes.

Flo's cocktail was awesome; Andy's? Not so much. They swapped sips in order to compare them, though, and it made for a good bonding experience.

When Andy revealed that his day job involves being “the Robin Hood of telesales” for a charity, Flo tried to get him to demonstrate how most of his calls go. It was… awkward, and he was clearly not having a good time doing it. In her interview portion, though, Flo said that she loves doing stuff like that to people. Here's the thing: It be funny to you… but it may not be to everyone else. Maybe wait until you've gotten to know the other person a little better first?

5. DO: Step outside your comfort zone.

Andy noted in his exit interview that he was really nervous going into the whole thing — which is to be expected, because dating is scary. But he and Flo (and all of the other folks taking part in “Watch Me Date”) just went for it, which is commendable. After all, what's the worst that can happen? You go on a date, it's not great, you never see the person again, and you have either an experience to learn from or a story to tell later on (maybe even both). Nothing ventured, nothing gained, right?

Watch the full episode below: