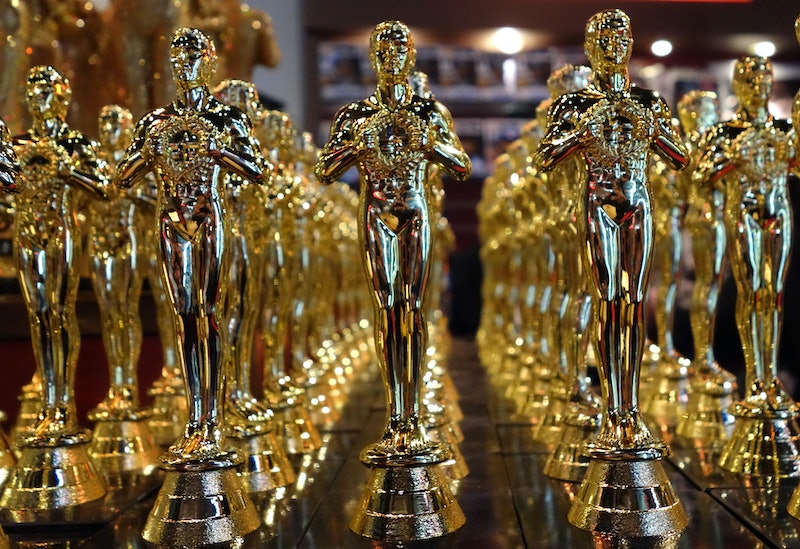 Last Thursday, pedestrians touring Hollywood Boulevard were treated to a version of the iconic Oscar statue that was sharply at odds with the glitz and glamour of Sunday’s Academy Awards: A version of the golden figure was spotted posed on all-fours, snorting a line of faux-cocaine; a credit card sitting nearby. The origins and message of the whole thing were originally unknown, and caused much confusion. Turns out, the installation is by LA-based street artist Plastic Jesus. On the installation’s base, there is a golden plaque that reads, “Hollywood’s Best Party”. Plastic Jesus, who prefers not to be known by his real name, explained his process to CNN, saying, "The Oscars is a very glitzy, high-profile event, so I wanted to bring attention to cocaine use in Hollywood. […] It's part of the culture here." The statue was on Hollywood Blvd for about five hours on Thursday (only a few blocks from where the Academy Awards took place on Sunday); Plastic Jesus told The Hollywood Reporter that he removed it when an old man called the statue “disgusting and obscene” and threatened to report it to the Hollywood Chamber of Commerce.

This isn’t the first time that Plastic Jesus has courted controversy with drug-related art. Last year he created an installation called “Hollywood’s Best Kept Secret” that showed “Oscar” shooting heroine, a piece inspired by the 2014 death of Philip Seymour Hoffman. In 2013, he released a piece of graffiti featuring cyclist Lance Armstrong attached to an IV bag (You can find images of these pieces below). The artist, who according to The Hollywood Reporter worked as a photojournalist in the UK before moving to LA eight years ago, told CNN:

We only hear about (drug abuse) when high-profile people in Hollywood have a meltdown, check into rehab, or die. […] There is a fear among these people that their careers will be ruined if they admit that they have a drug problem. […] Hopefully, my work will help people who have a problem and think they're alone, but also make a difference on a governmental level. They are not doing enough.

You can check out more of Plastic Jesus’ work on his website.

More like this
The Music Industry Continues To Fail Black Women
By Precious Adesina
Remember When Benedict Cumberbatch Announced His Engagement In A Newspaper Ad?
By Hugh McIntyre
Tom Cruise Gives His Honest Review Of Lady Gaga’s New Song For 'Top Gun: Maverick'
By Hugh McIntyre
UK Viewers Will Have To Wait To See Jessica Biel’s Killer Housewife Series
By Rachel Mantock
Get Even More From Bustle — Sign Up For The Newsletter