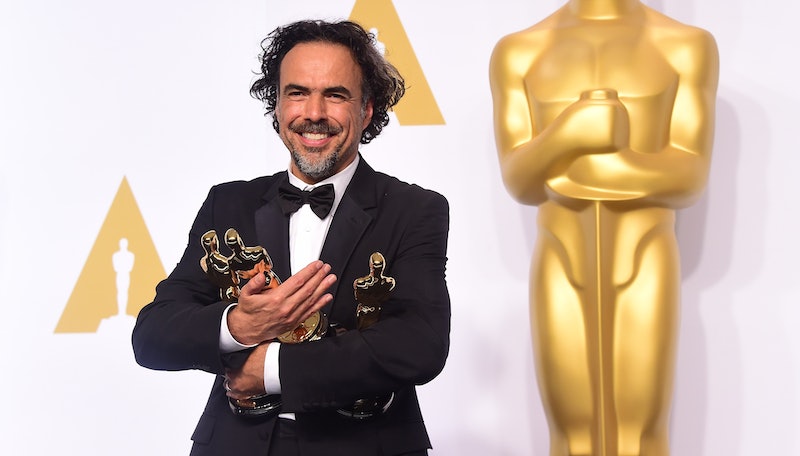 If you watched the Oscars Sunday night — and even if you didn't, really — you probably already know about the "joke" Sean Penn made while he was presenting the award for Best Picture to Birdman. In reference to the film's Mexican writer and director, Alejandro González Iñárritu, Penn quipped, "Who gave this son of a bitch his green card?" Cue the incredibly awkward shared feeling amongst everyone watching the show at that moment — everybody at home included. But as the Best Director winner tells it himself, Iñárritu wasn't offended by Penn's remark because it was an inside joke between the two of them.

According to Variety, Iñárritu, who has a history with Penn as he's directed him before, explained the joke to reporters backstage saying,

I found it hilarious. Sean and I had that kind of brutal relationship where only true friendship can survive. When I was directing him in 21 Grams, he was always making jokes … I made a lot of very tough jokes that I will not tell you. I didn’t find it offensive, I thought it was very funny.

It's definitely a relief that Iñárritu wasn't offended, because this talented man obviously deserves to enjoy his night in the spotlight. Best Director and Best Picture at the Oscars? That's a really big deal, and it shouldn't be overshadowed by the fact that Sean Penn thought an ill-timed joke would be a good idea.

And if you don't agree with Iñárritu and you were actually offended, inside joke or not, I'm right there with you. I definitely appreciate banter during award shows that run long like the Oscars, but racist banter might not necessarily be the way to do it. Not that I think Penn had malicious intent behind his words — in his world, he probably had no idea of the implications his words might have, especially for the people who were watching and reacted instantly on outlets like Twitter and Facebook. Even if he didn't offend Iñárritu, he offended plenty of others, and that's what they'll take away from watching that moment.

Besides, there are all things we should agree not to joke about in a public forum, and anything that could possibly be construed as racist should be at the top of that list. Regardless of where you come from or what your ethnicity is, it's hard to accomplish something as huge as winning four Oscars for a movie you wrote and directed all in one night, and to celebrate Iñárritu's hard work, the news should be centered around that instead of being forced to respond to the tasteless joke that was made before the win.

More like this
'Heartstopper’s Joe Locke Has A Sweet Message For Queer Fans
By Sam Ramsden
Jake Daniels Just Became The UK’s First Active Football Player To Come Out As Gay Since 1990
By Sam Ramsden
Laura Dern Said “Cultural Awareness” Made Her Rethink This 'Jurassic Park' Fact
By Grace Wehniainen
Colin Firth Revealed His Favourite Mr. Darcy (& No, It's Not Himself)
By Sophie McEvoy
Get Even More From Bustle — Sign Up For The Newsletter