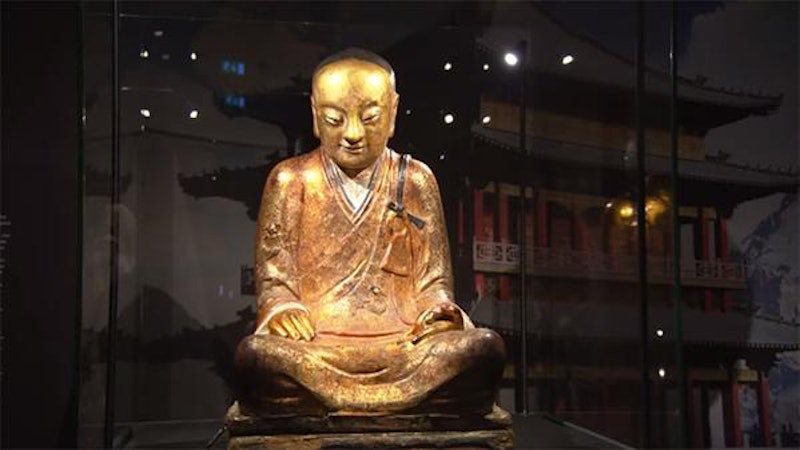 This story is equal parts amazing and creepy, which, let's be honest, is the best combination of qualities that any story can possibly have: Researchers for the Drents Museum in the Netherlands have revealed the mummified body of a Buddhist monk inside a statue dating back to the 11th or 12th century. The research team, led by Buddhist art and culture expert Erik Bruijn, already knew that the statue contained human remains, but it wasn’t until they took the object to the Meander Medical Centre in Amersfoort that they were able to build a complete picture of its history. According to the NL Times, a CT scan and endoscopy revealed not only the full skeleton of a mummified monk, but also that the monk’s organs had been removed prior to mummification. In their place were scraps of paper covered in ancient Chinese writing. The research, which involved both museum experts and medical doctors, has produced stunning images of the mummy’s full skeleton inside the statue, as well as bone samples that can be used for DNA testing.

The mummified monk housed inside the reliquary has been identified as Buddhist master Liuquan, of the Chinese Meditation School. Informational material from the Drents Museum suggests that this statue and its resident might be an example of self-mummification, a not-uncommon practice among monks in Asia in the 12th century. Self-mummification is a grueling, tortuous process practiced over a number of years, involving a special diet, poisonous tea, and being locked inside a tomb. If you want to be both horrified and grateful that you’re not a 12th-century monk, check out the details here.

To see the statue for yourself, hop on over to Budapest, where it will be on display at Hungary’s National Museum of Natural History until May 2015.

More like this
How To See The Lunar Eclipse On May 15-16, 2022
By Kaitlyn Wylde
How The City Healed Five Years On From The Manchester Arena Attack
By Ella Glover
Michigan’s Governor Is “Going To Fight Like Hell” To Protect Abortion Access
By Andrea Zelinski
Starbucks' Summer Menu Includes A New Chocolate Cream Cold Brew
By Emma Garza
Get Even More From Bustle — Sign Up For The Newsletter