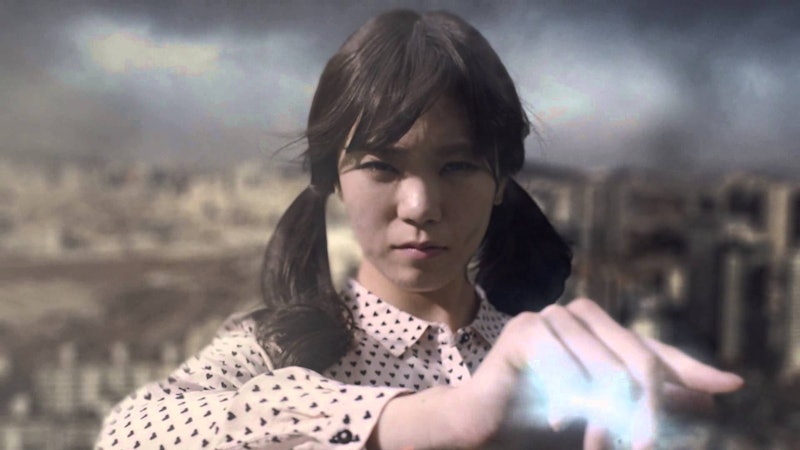 If you’ve ever been struck down by Satan’s curse (also known as PMS) and thought, “God, if only I had a K-Pop power anthem to see me through this,” today is your lucky day, my friend. 22-year-old K-pop star Lizzy has teamed up with comedian Park Myung Soo to create the new premenstrual classic, “(Goodbye) PMS,” a rousing battle cry for period-having ladies everywhere. In the video, Lizzy battles a horde of red-suited PMS devils, led by Park Myung Soo (whose own initials happen to be “PMS”—coincidence or fate??). The video begins with the evil PMS inflicting our heroine with zits and tempting her with food. Lizzy is headachy and overwhelmed with irritation, as the PMS devil intones:

Hey hey hey, what’re you looking at? You know who I am?

Get sick, roll around, cry

Even your grandma went through it, a woman’s fate

It’s already a week before that day*

It all culminates in an epic battle, in which Park Myung Soo, towering over the city, shoots PMS-beams into random women with his PMS-laser-eyes. Even a poor lady dog gets infected with the premenstrual scourge! Can the madness be stopped?

Fortunately, our heroine gets her hands on some apparently-magic anti-PMS pills, and she fights back, besting her opponent with finger lasers and Midol. Huzzah!

And then, they dance!

Look, I have no idea why this exists, but do we really need a reason? Let's just take this ridiculousness for the gift that it is. I love you, K-pop.