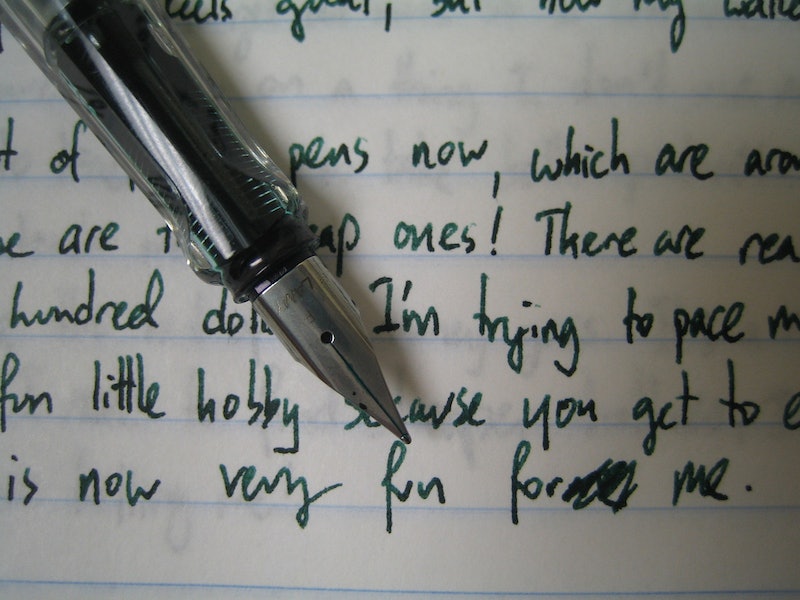 It's been a long time since I penned my college application essays, but that doesn't mean I don't still appreciate them. On the contrary: I think memorable college admissions essays are to be applauded. Why? Because anyone who can make theirs interesting, thus bringing a modicum of relief to those who have to actually sit there and plow through them all, definitely deserves some acknowledgment for their work. And hey, wouldn't you know it? That's the subject of today's AskReddit thread: “College admissions counselors of Reddit, what's the weirdest/worst/most memorable essay you've read?”

As is wont to happen in an AskReddit thread, many — possibly even the majority, although I haven't actually counted them, so do with that what you will — of the responses did not come from their intended source; in this case, we're talking about college admissions officers. Some of them were submitted by the people who wrote them; others by people who knew the writers in question; and still others have the “a friend of a friend who dated my cousin's best friend” level of remove that can sometimes bring their veracity into question. Either way, though, they're all good for a laugh — and a few of them might even teach you something. Full steam ahead for a wide variety of lessons in what to do while writing your college application essays — and what not to do, too.

Here are 12 of the most notable examples; head on over to AskReddit for more. Oh, and for anyone who's waiting on their acceptance letters? Good luck! I believe in you!

1. The Theory of Cat/Toast Equilibrium

But… what does happen? I must know!

While we're on the subject, the University of Chicago seems like they've mastered the art of making college applications not boring for the people who actually have to read them. Check out some of essay prompts from this year's app:

Not going to lie: I am considering writing answers for them just for the hell of it. Because you know what? It actually sounds — dare I say it? — fun.

I would imagine that would be a pretty terrifying read. Quick, teach her to use her powers for the forces of good!

You may already be familiar with this one, but for the curious, here's the story behind it: Humorist, writer, and musician Hugh Gallagher penned the glorious satiric creation excerpted here for Scholastic Press' national writing contest when he was in high school. Unsurprisingly, he won. For some years, there was confusion surrounding whether or not he actually used it as his college essay; in 1998, though, Gallagher emailed University of York comp sci professor Susan Stepney, who had posted the essay on her website, noting that he did in fact send it along with his applications. For the curious, he ultimately attended NYU. Here's the permalink for the full comment — it's worth just for the final line. Trust me.

4. The Power of the Mighty Trombone

I was unable to discern whether or not this one actually happened or whether it's just an urban legend — but I'm willing to bet it's the latter. Either way, though, I think it's a terrible way to try to teach the “think outside the box” lesson; I feel like it encourages laziness more than anything else. But maybe that's just me.

6. The Key to Effective Multitasking

Here's the thing with writing humorous college application essays: They only work if you're actually… y'know… funny. I feel like maybe the right person might have been able to make this idea work, but the execution of the idea this time around just wasn't up to par. However, this also happened:

Either the admissions officers loved it, or they didn't actually read it. The jury's still out on which one it is.

8. We Are Gathered Here Today…

To be fair, I'm not totally sure what's to be gained by sending your own obituary as a college essay; unless the prompt was something like, “Write whatever you want, as long as it is at least 500 words long,” it doesn't seem like it would really answer any questions the admissions committee might be relying on the essay to fill them in about. At the same time, though, clearly someone could have used a little Journalism 101.

This one was copied from another thread and pasted in this one, but I think it's definitely a winner.

10. The Importance of Proofreading

Oh, come on. I wouldn't blame these two for using their legacy to help them get a leg up — but relying solely on it like this? That's cheating. Also, shame on the school that let them get away with it.

I hope this Redditor is planning on studying creative writing. You've got a great future ahead of you, kid — even if you do need a little work with your punctuation and grammar.