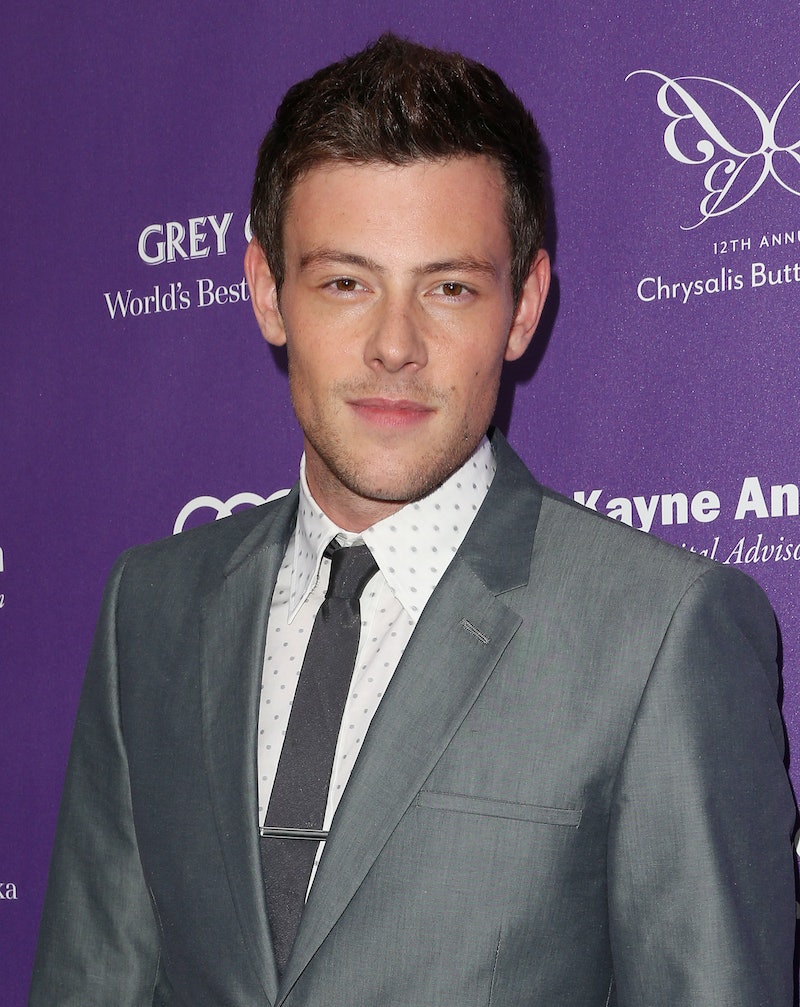 Glee fans have been anticipating this moment for a while: the moment when the show says goodbye not only to one of its most important characters, but also to one of its most beloved cast members. Ever since Cory Monteith's untimely death back in July 2013, the fans, cast and crew of Glee have been dreading the moment that they'll have to say goodbye to Monteith and Finn. It's hard to say how the show will develop without Finn, since he was such an integral part of the show, but here's what we know about what's set to go down in Thursday night's episode, titled "The Quarterback." After all, knowledge is power, so maybe knowing what's going to happen will keep the tears to a minimum... nope, just watched the promo again, it will not.

"In the wake of Finn’s sudden death, former members of New Directions return to McKinley to remember their fallen friend. While a stoic Mr. Schue encourages all the gleeks to “memorialize him the way we do everything – by singing about it,” some of the kids find the exercise more cathartic than others. At the Hudson-Hummel home, Kurt, Burt and Carole sort through Finn’s belongings and what begins as a somber occasion blossoms into a poignant and much needed family moment. Meanwhile, Emma grows concerned when she believes Will is so busy taking care of others that he’s not allowing himself time to grieve; Santana struggles with using her “bitch” mask to hide her fond feelings for Finn, and has a run in with Bree, McKinley’s "New Santana"; and following a heart-to-heart with Coach Beiste, Puck honors Finn’s memory by making a life-changing decision about his future.

Finn's funeral will bring back some faces from McKinley High we haven't seen in quite a while: Mercedes, Mike Chang, Puck, Coach Bieste, Emma Pillsbury, and Finn's mom, Carole Hudson-Hummel, are all set to make appearances. According to Ryan Murphy, not all the characters were written into the show, but many actors, like Iqbal Theba (who plays the former principal and current janitor of McKinley High), requested that they be included in the episode. But what's surprising is who won't be in the episode: since Heather Morris was still very, very pregnant when the episode was filmed, she does not appear. And Dianna Agron, aka Finn's ex-girlfriend Quinn Fabray, is also not set to appear in the episode, although the reasons for her absence are unknown.

...will not be discussed at all in the episode. Glee has always been more than willing to provide a teachable lesson on any subject, be it school shootings or meningitis vaccines. The show's writers at first toyed with the idea of doing the same with Finn's death, but ultimately decided to forego the afterschool special treatment. There's a lot of evidence to suggest that this will be detrimental to the show's narrative and to its viewer's education, but creator Ryan Murphy had some solid reasons:

Basically, what we're doing in the episode is we are not telling you yet, or maybe not at all, how that character died. The idea being, how somebody died is interesting and maybe morbid, but we say very early on in the episode, 'This episode is about a celebration of that character's life.' That might be weird for some people, but it felt really exploitative to do it any other way.

Or, as Kurt puts it in the episode, according to The New York Times:

“Everyone wants to talk about how he died, too, but who cares? One moment in his whole life; I care more about how he lived.”

Will still be there — this is still Glee, after all. According to early reviews, Tina is distressed about having to return to her all-black goth phase (and of course, Miss Pillsbury is there to give her a few pamphlets). And Sue Sylvester is, as always, there to lend stinging insults and sage advice all at once. Glee lost a huge part of the show this summer, but it didn't lose it's humor — whether that's to the detriment or the benefit of Finn's tribute episode remains to be seen.